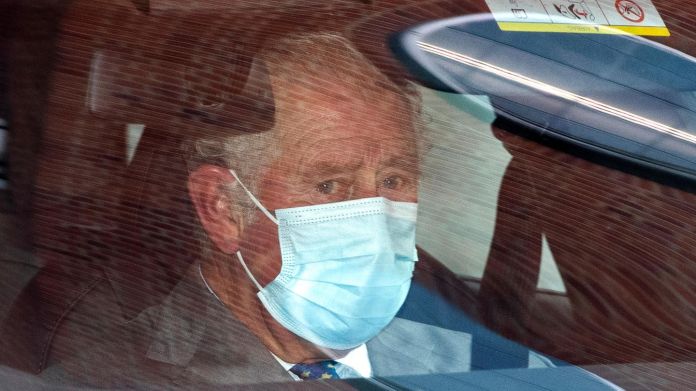 Prince Charles obviously has tears in his eyes after visiting his father Prince Philip in the hospital for about 30 minutes.

Prince Philip has been in a London hospital for several days, “for observation,” as it is called. He shouldn’t get a visit from the family so that he can relax. But now his eldest son rushes to him and leaves the hospital after a short time, visibly moved. Images that worry.

Prince Charles, 72, was photographed yesterday, Saturday (February 20), when he arrived in front of King Edward VII’s Hospital, where his father, Prince Philip, 99, is currently receiving treatment.

The  Duke of Edinburgh was rushed to London Hospital last Tuesday after apparently not feeling well for several days.

Prince Charles is photographed upon arrival at King Edward VII Hospital in London.

Prince Philip was in a “good mood” when he was admitted. However, the doctors recommended that he stay there for observation at least until this weekend and to “rest”.

Prince Charles’ unexpected visit worries. A spokesman had previously said that due to the corona pandemic, visitors would only be admitted under “exceptional circumstances”. Charles had come all the way from his country home in Highgrove in Gloucestershire. He left the hospital after 30 minutes and looked noticeably moved.

Tears stood in the eyes of the heir to the throne as he left the hospital grounds in his car. It is hoped that the Duke’s condition has not deteriorated. However, Prince Charles’ return to his country estate in Highgrove after the sick visit speaks for a stable condition of the 99-year-old. He went straight back to Gloucestershire, a spokesman for Clarence House confirmed.

VfB Stuttgart: Mislintat the top commitment for Rummenigge! Europe in...

Retail – Berlin – rush to shops in Berlin on Advent...

Coronavirus: 11 new infections among employees of the Bonhoeffer Clinic “Poligonale” -Festival: “I’m not sure if I want to say theater...