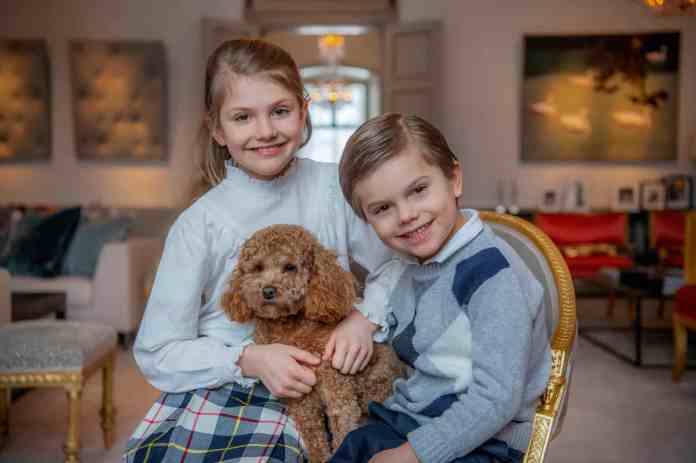 Princess Estelle of Sweden is celebrating her ninth birthday today. In line with this, the royal family released four new photos.

The  palace has published new photos for her special day.

The  daughter of Crown Princess Victoria and Prince Daniel poses for the camera in a white blouse, checked skirt and black patent leather shoes.

Her hazel hair, which falls over her shoulders, has become quite long. Princess Estelle also seems to have had a decent growth spurt.

Prince Oscar and the dog Rio are allowed in the picture

With these good pictures it is hard to believe that the sweet Swede likes to listen to hard rock music. You can find out more facts about Princess Estelle here.

The  new photos were taken at Haga Castle. Princess Estelle lives there with her parents and her younger brother Prince Oscar.

The  photo taken with Prince Oscar and family dog ​​Rio is particularly cute.

The  Cavapoo sits peacefully between the children of Crown Princess Victoria and Prince Daniel. Smoothly you could think of Rio as a stuffed animal. But the impression is wrong.

The  cute fur nose actually has a lot of energy, as videos prove.

Prince Oscar is just as cute. Princess Estelle’s little brother grins cheekily at the camera. He’s also dressed up for the birthday photos.

The  four-year-old has gelled his hair off his face, and his outfit is a sweater with a shirt collar. Victoria and Daniel can really be proud of their little royals.

Soon there will be the next photos of Princess Estelle and her little brother. Prince Oscar celebrates his fifth birthday on March 2nd.

Why Chancellor Merkel is not allowed to govern

Because of the new Corona mutation: The Netherlands prohibit flights from...