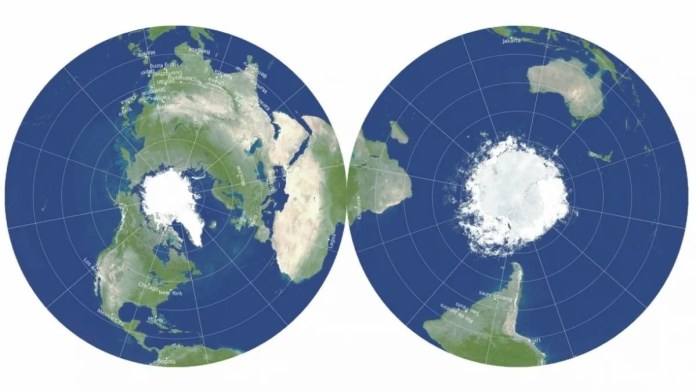 With a two-sided projection, three American researchers want to have created by far the most accurate two-dimensional map of the world and promise a “radically different” way of seeing our earth.  The  astrophysicist Richard Gott, the mathematician Robert Vanderbei and the physicist David Goldberg divide the earth into two parts, which are next to each other at the back.

The  result reminds you of a record. Alternatively, the two parts can be placed next to each other, but then some of the advantages are lost.

The  error rate of their projection is orders of magnitude lower than the most faithful projections to date, they assure you.

Much more accurate than the previous record holder

It is well known that the surface of the earth cannot be represented on a two-dimensional surface without distortions. Cartographers have developed a wide variety of projections that either reduce individual errors, i.e. are as true to length, as true as possible in terms of area or angle, or, through compromises, contain as few distortions as possible. In order to make the sum of the errors comparable, Richard Gott and David Goldberg had developed a formula to express the degree of distortion in a number. A globe would have a Goldberg God value of 0.0, the best map network design so far – the Winkel-Tripel projection – comes to 4.563.

The  proposal you have now presented creates a proud 0.881.

The  astrophysicist Richard Gott writes at Scientific American that he and his colleagues have come to the impression that the angle-triple projection has reached a limit. It wouldn’t get much better with such a projection or a similar one. When you get to such a point in physics, you often have to approach a problem completely differently. That is exactly what they would have done with their projection. In principle, they would have just flattened the earth. You could either separate the western and eastern hemisphere, or the northern and southern hemisphere. He therefore prefers the latter. After all, all they had to do was set the projection for the two halves.

Your world map is not suitable to be hung on the wall, but could simply be placed in school books, for example. In addition, you could not see the whole world at a glance, they admit, but that wouldn’t be possible with a globe either. In terms of distortion, it beats the angle-triple projection in all six categories that it identified. You could measure distances with a thread, which you can also wrap around the edge if necessary. Unlike other well-known projections such as Gerhard Mercator’s, theirs even has a maximum value for errors in length accuracy.

The y would never exceed 22.2 percent, while otherwise they would be enormous at the margins.

Sforza clarifies the open questions about the restart

Anti-Semitism expert: “Something is growing in Germany that makes life more...

Federal theaters play from January 22nd on Fridays and weekends Only today: Media Markt and Saturn are sparking the best big...