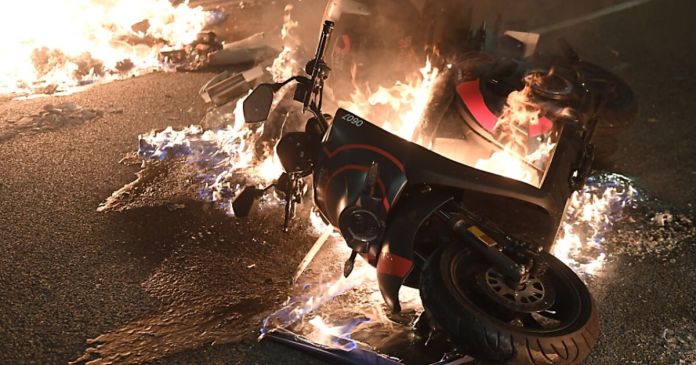 On Tuesday evening, thousands of people took to the streets in several cities in solidarity with Hasél.

The re were violent riots. According to the authorities, a total of 33 people had to receive medical treatment for minor injuries, 19 of them police officers. In Barcelona, ​​1,700 people marched through the streets with “Free Pablo” signs on Tuesday evening. Towards the end of the rally, some protesters started setting fire to garbage cans and throwing stones and other objects at the police.

Hasél was convicted of glorifying terror and insulting the Spanish crown and state institutions.

The  background is a series of Twitter posts in which the 32-year-old rapper attacked the monarchy and the police. He called police officers, among other things, “shitty mercenaries” and accused them of killing demonstrators and migrants.

Hasél, whose real name is Pablo Rivadulla Duró, was given until Friday to voluntarily surrender to the police. Instead, he barricaded himself in the University of Lleida on Monday with dozens of supporters.

The n on Tuesday he was arrested during a police operation. Hasél protested against his arrest with the words: “It is the fascist state that arrests me. Death to the fascist state!” A police spokesman said, “We’re taking him straight to jail.”

The  sentence against Hasél had already sparked protests in Spain. A petition calling for the rapper’s release has been signed by more than 200 artists, including well-known director Pedro Almodóvar and Hollywood star Javier Bardem.

The re have been several protests in Madrid and Barcelona in recent weeks.

Last week, under the pressure of the protests, the Spanish government announced a reform of the criminal law, through which “verbal excesses in the context of artistic, cultural or intellectual” actions would no longer fall under criminal law.

Vice-Prime Minister Carmen Calvo did not want to comment on Hasél’s arrest. Referring to the plans to reform criminal law, she said that freedom of expression must have “room for understanding and tolerance in a mature democracy like ours”.

Hasél often attacks the Spanish royal family in his songs. He accuses her of having succeeded the dictatorship of Francisco Franco. Many of his texts contain anti-fascist or Marxist statements. In one of his songs Hasél wishes to let Spain’s previous King Juan Carlos I “fly through the air”. “This is not terrorism, it deserves heaven,” says the rap song.

For many Spaniards, the Hasél case brings back memories of the rapper Valtonyc, who was convicted of similar allegations in 2018 and then fled to Belgium.

The  extradition of Valtonyc requested by Spain is rejected by Brussels on the grounds that the allegations against him are not a criminal offense in Belgium.

Austria has to go to Scotland to kick off

Skeleton – Flock third at the home world cup in Igls

Handball News: Hungary follows Germany in the main round | ...

Too much goods bought: Now comes the big Corona sale

“Maybe even a revolution”: Brinkhaus advocates reform of the century