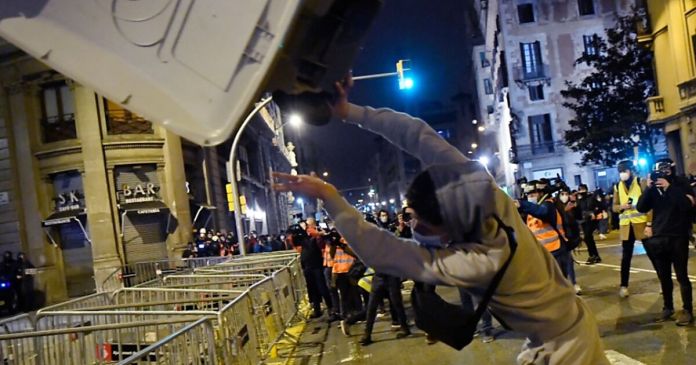 Nevertheless, the police were occasionally pelted with bottles, rubbish bins and firecrackers, and some shop windows broke, as can be seen on TV pictures.

The  police have arrested five people who ransacked a fashion shop, reported the newspaper “El Periódico”. 106 people, including 32 minors, have been arrested in Barcelona since the protests began. 82 police officers and numerous demonstrators were injured, as the newspaper “La Vanguardia” wrote. A woman lost an eye on Tuesday when she was hit by a police rubber bullet.

The  arrest of Hasél, who showed deep hatred of the police and politics in some of his texts and in tweets, also sparked tensions in the left-wing coalition government in Madrid.

The  government is fundamentally willing to change the law so that there are no more prison sentences for cases like Hasél. However, proceedings are pending against the 32-year-old for threatening a witness and assaulting a journalist.

Coronavirus: Live ticker on developments in Bremen and Germany – Politics:...

“There is a lot to repair”: Ex-US Secretary of State Albright...

Corona and schools: Analysis shows how effective the closings really are

Footballer of the year David Alaba: “I am very honored for...

Stuttgart a year without a lord mayor? Sunday’s election could...

Aldi: Mysterious apple spritzer photo puzzles Netz – “How can that...