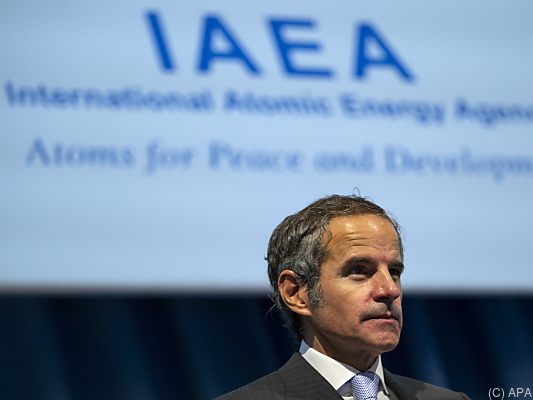 The  agreement between Iran and the UN Atomic Energy Agency (IAEA) to continue cooperation has led to protests by hardliners and government opponents in the Iranian parliament. According to the Tasnim news agency, the planned meeting on the budget of the new Persian year – from March 21 – was suspended on Monday and a closed meeting was called.

The  new agreement with the Vienna UN agency is to be examined.

The  Director General of the International Atomic Energy Agency (IAEA / IAEA), Rafael Grossi, received a promise from Iranian nuclear chief Ali Akbar Salehi on Sunday in Tehran that the authority would be able to continue its controls of the Iranian nuclear program for at least three months.

The  inspectors did not have the same extensive access as before, but he expected that they could do their job, said Grossi after his return to Vienna.

The  controls are designed to ensure that the Iranian nuclear program is only for civilian purposes.

The  IAEA hopes to find a more far-reaching solution within three months.

According to some MPs, however, the agreement with Grossi is not in line with the Iranian nuclear law, which was passed with the votes of the hardliners in November 2020. Foreign Office spokesman Said Khatibsadeh opposed that the cooperation with the IAEA would be restricted from Tuesday and that the video material from the IAEA surveillance cameras would be confiscated for three months. “Everything under the new Atomic Energy Act,” said the spokesman.

The  Iranian nuclear organization AEOI declared, as ordered by parliament, that from Tuesday, Iran would no longer work with the IAEA within the framework of the IAEA additional protocol, but only on the basis of the Nuclear Non-Proliferation Treaty. As a result, there will be restrictions on inspections of the facilities.

The  AEOI also confirmed that the IAEA would no longer have access to video footage from its surveillance cameras for the next three months. If a political agreement is reached during this time, the IAEA will also receive the videos. If not, they would be deleted. According to the AEOI, an agreement must primarily include the lifting of US sanctions.

The  2015 Vienna nuclear agreement between Tehran and the five UN veto powers and Germany was intended to prevent Iran from building a nuclear weapon, in return the sanctions against Tehran should be lifted. However, under President Donald Trump, the United States got out of the deal in 2018 and again imposed sanctions to bring down Iran economically. Because the other partners of the agreement actually also adhered to the US sanctions, since May 2019 Iran has been step by step distance from the agreement and increasingly no longer adheres to agreements.

After the change in the White House, the European states are trying to revive the nuclear deal. In the previous week there were talks between the foreign ministers of France, Germany and Great Britain as well as US foreign minister Antony Blinken, who is also attending a meeting of all EU chief diplomats in Brussels on Monday. In the run-up to the meeting, Foreign Minister Alexander Schallenberg (ÖVP) expressed hope that Europe would act as a mediator between Washington and Tehran.

Iran is mainly concerned with the sanctions that plunged the oil-rich country into the worst economic crisis in its history. This could also have domestic political consequences in the Iranian election year. Tehran declares that it will not be ready for nuclear negotiations with the US government under Joe Biden until the US reverts to the agreement and lifts its sanctions.

Now LIVE: LASK against WSG Tirol in the ticker – football

Oschatz (Saxony): Infected nurses have to look after corona patients! ...