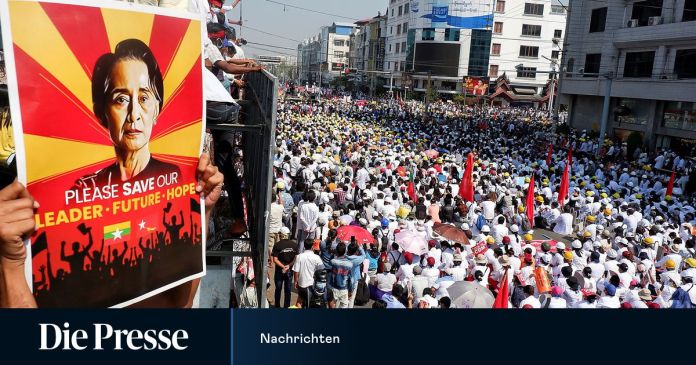 Nationwide protests against the military takeover are expanding. Two people were killed in clashes at the weekend. US Secretary of State Blinken condemned actions by the military

Three weeks after the seizure of power, the junta in Myanmar failed to contain the daily protests and the movement of civil disobedience. Most shops in the country were closed on Monday as part of a general strike. “Everyone is joining in,” said San San Maw, 46, at Hledan Junction in the capital, Yangon.  The  intersection has become a starting point for the peaceful rallies.

However, media owned by the military warned of further actions on Monday. “

The  protesters are now inciting people – especially the emotional teenagers and young people – to take a confrontational course where they will lose their lives,” said state television MRTV.

Protester Htet Htet Hlaing, 22, said she was scared and prayed before joining the protests on Monday. But she would not be discouraged. “We don’t want the junta, we want democracy. We want to create our own future,” she said. “My mother didn’t stop me from going out on the street, she just said ‘take care’.” City residents reported that the roads to some embassies, including the US embassy, ​​were blocked. Demonstrators often gathered in front of the diplomatic missions to demand foreign intervention. Two people were killed in the protests over the weekend.

Several Western countries have condemned the coup and the violence against demonstrators.

The  military overthrew the government on February 1 and arrested the de facto Prime Minister Aung San Suu Kyi. On that day, the parliament newly elected in November should have met for its first session. Suu Kyi’s National League for Democracy (NDL) party won the election by a large margin, but the military speaks of fraud.

The  protesters are calling for Suu Kyi to be reinstated.

The  army stayed in continuously until 2011 Myanmar ruled.

Pope before historical mission in Mesopotamia

Study on women in German orchestras

Porsche of the late football legend is being auctioned Animal Welfare and Spain: Wandering Hundreds of Cattle on the Mediterranean Sea – Panorama

Iraq: Missile attack on US air force base

Vaccination – Biden: Vaccine for all adults by the end of May

Greece: “The quake was very strong and it took a long time”

Despite thousands of imprisonments: Erdogan presents plan for human rights

Deer with an arrow in its head is fighting for survival This is how “Temptation Island VIP” ends for Giulia and Ludwig!