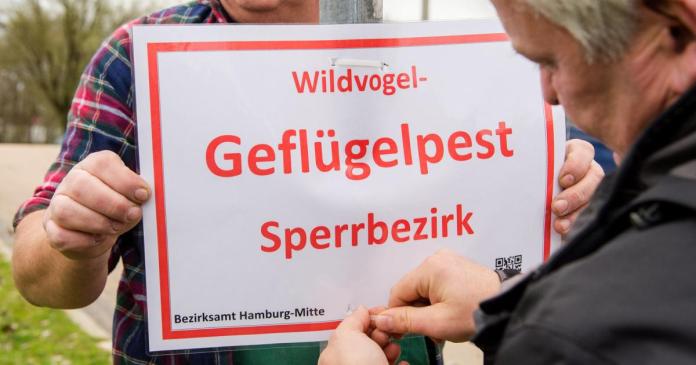 Seven employees of a poultry farm in the south of the country fell ill in December. Those affected are fine, they have recovered.  The  disease was mild.

The  disinfection work should be completed in the next few days and new chickens should be bought in mid-April, it said.

The  vector research center in the Siberian city of Novosibirsk had proven that the employees were transmitted with the H5N8 virus.

“With avian influenza viruses there is always the possibility of a quick change in the properties,” said a spokeswoman for the German Press Agency in Moscow on Sunday. In addition, with a high viral load, as in affected companies, it must be expected that there will be transmissions one day.

The  Friedrich Loeffler Institute now wants to get more information on the cases in Russia, said the spokeswoman. She reminded of the applicable hygiene rules: dead wild birds should therefore not be touched with bare hands. If it does come into contact, hands should be washed thoroughly. If poultry farms affected are evacuated, protective clothing is worn.

In Austria, too, outbreaks of bird flu have been detected in animals on several occasions.

According to the institute, the H5N8 virus has not yet been transmitted to humans. “With avian influenza viruses there is always the possibility of a quick change in the properties,” said a spokeswoman on Sunday. In addition, with a high viral load, as in affected companies, it must be expected that there will be transmissions one day.

The  so-called avian influenza was first observed in Italy in 1878.

Further cases were confirmed on February 10: a swan in Vienna (H5N8) and two swans in southern Styria (H5N5).

France is a high incidence area with compulsory corona testing –...

Giffey sees “lateral thinking” called for the protection of the Constitution...

Plug-in hybrids: Will the trend in Germany soon overturn?

Lockdown in London – “Despair and Sadness”