Almost every second branch closes, 10,000 full-time positions are lost – Commerzbank is pursuing a tough austerity course. According to a report, management is therefore preparing for a massive loss of customers.

The  reason is the planned restructuring of the group.

The  bank itself did not initially comment on the information.

According to expectations, the bank will lose around 300 million euros in income due to the customer departure by 2024, as the newspaper further reported. This should be offset by credit growth and more business with corporate and business customers as well as very wealthy private customers. Business with new customers should also help.

The  financially troubled one Commerzbank wants to close almost every second branch in the course of its intensified restructuring and cut 10,000 full-time jobs. In addition, new pricing models are to be introduced. That is why one expects an increased outflow of customers.

The  institute currently has around eleven million private and corporate customers.

The  bottom line for the financial house in 2020 was due to renovation costs, goodwill amortization and significantly increased risk provisioning for bad loans a loss of 2.9 billion euros after a profit of 585 million euros the year before.

The  operating loss was 233 million euros.

The  new Commerzbank boss Manfred Knof wants to be in the black again this year. Despite the burdens of the Corona crisis, the operating result should be positive in 2021, and then rise to 2.7 billion euros in three years. By the beginning of May he wants to have a social plan in the towel.

Facebook’s cryptocurrency has a new name

“Joe Biden International”: This is how the Scots Trump spoil golf 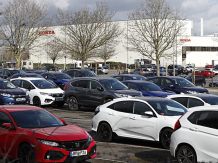 Japan wants to ban cars with internal combustion engines by 2035...

Corona: when will I get the vaccination from my doctor?