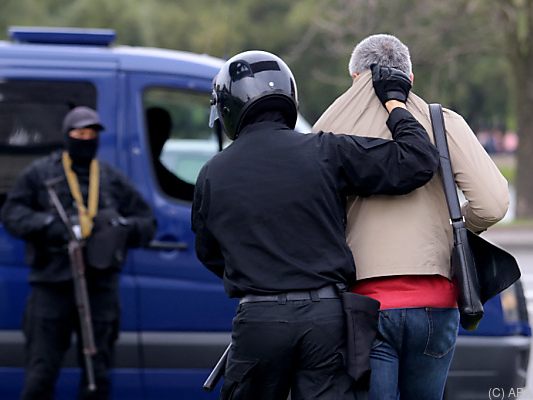 
House searches and arrests across the country
© APA (AFP)

Six months after the mass protests began in Belarus, there have been nationwide raids on journalists and human rights activists. This is to determine how the protests in late summer and autumn were financed, the state investigators announced on Tuesday in the news channel Telegram. According to human rights activists, there have been 30 house searches with individual arrests in all major cities in the country.

The  organization said that phones and devices were confiscated. Two members were arrested.

The  activist Valentin Stefanowitsch said: “That is the logic of the repression – at the beginning you come to the politicians, the activists and then to the journalists and human rights activists.”

The re were also raids on the Belarusian Union of Journalists. Its chairman, Andrej Bastunez, was taken away by the police, but was later released, it said.

The  Organization for Security and Co-operation in Europe (OSCE) expressed “extreme concern” at the reports of raids and called on the authorities in Belarus to respect the activists’ human rights.

The  aid organization Amnesty International criticized this as “a centrally organized and targeted attempt to severely weaken the country’s independent media and human rights organizations”.

Austria’s foreign ministry described the reports on the raids and arrests as “very alarming”. “Freedom of the media and a vibrant civil society are the backbone of all democracies. Your rights must be protected,” said Twitter on Tuesday.

In Germany, the German Association of Journalists (DJV) criticized the Belarusian authorities. “

The  repression against the independent media must stop, the imprisoned journalists must be released immediately,” demanded chairman Frank Überall.

The  German Federal Government and the EU Commission should take measures to bring ruler Alexander Lukashenko “to reason”.

The  Association of European Journalists (AEJ) was outraged by the measures.

“This is the real face of the threat to the free media everywhere, not just in Russia, but also in EU countries like Poland and Hungary,” said Tsaousidou. “

The  vice-president of our AEJ section in Minsk, Andrej Aliaksandrau, has been in prison since January 12, just because he reported on the mass demonstrations.” Aliaksandrau, founder and editor-in-chief of the Belarus Journal news website, was deputy chairman of the Belarusian Association of Journalists until 2012.

The  authoritarian leadership had repeatedly claimed that the demonstrations after the presidential election in August were funded from abroad. For weeks, tens of thousands of people had regularly protested against the elections, which were viewed as fraudulent. Protesters were arrested en masse. Many complained of police violence. Recently there have been minor protests in residential areas.

The  opposition and western states no longer recognize Lukashenko as president after the elections.

The  66-year-old has been ruling the ex-Soviet republic with a hard hand since 1994.

Raumfahrt – Berlin – Livestream contribution to the planned landing on...