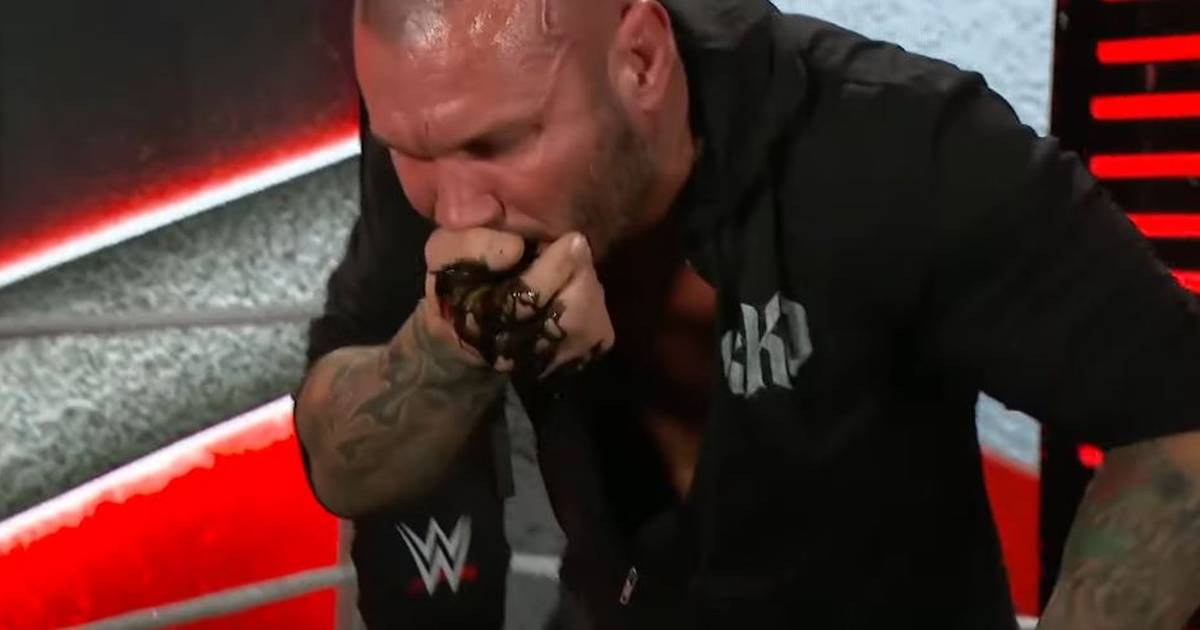 The  Miz surprisingly won the title at No Escape (Elimination Chamber), WWE made for even more conversation.

On the one hand, the TV show Monday Night RAW pushed the title event with a view to WrestleMania 37 with a gigantic duel between old rivals Bobby Lashley and Braun Strowman.

On the other hand, the dark storyline with Randy Orton, Alexa Bliss and the supposedly fiery horror character

The  Fiend was pushed forward with a violent moment of shock.

Orton, who turned to Bliss in an angry backstage speech, suddenly showed signs of nausea – and spat out a liquid that at first glance looked like he had to vomit blood.

Randy Orton as once the Ultimate Warrior

Orton – eliminated early on Sunday in the six-way fight for the WWE title – bliss blamed for the fact that her head games of the past few weeks had thrown him out of step and indicated that he would explicitly want revenge on her for it. Before the “Viper” could elaborate on that, the black liquid came out of his mouth.

For fans of the league, the bad-looking effect was easy to assign: It fits into the story, reflects the moment in which Bliss cost the match against Edge the night after the Royal Rumble Orton – by suddenly appearing in the ring, even a black pseudo Ran blood from her mouth. That could be read as a symbolic indication of the imminent return of Fiend.

The  spit shocker around Orton now also brought back memories of a famous WWE shocker of the early nineties: the moment in which the Ultimate Warrior, who died in 2014, appeared to have vomited for inexplicable reasons after a match – which was then the result of a voodoo Curse of his then rival Papa Shango was declared (WWE Hall of Famer Charles Wright, later known as Kama and

Braun Strowman demands his piece of the cake

The  title race was also spun turbulently: At the beginning of the show, Bobby Lashley and Manager MVP interrupted Miz’s speech and gave Miz a one-hour ultimatum.

The  Allmighty” demanded a title match as a reward for attacking ex-champion Drew McIntyre before the title change and thereby softening Miz for the money-in-the-bank redemption.

Miz let the ultimatum run out and tried to delay Lashley, whereupon his old enemy Braun Strowman showed up and demanded a title chance himself.

Ultimately, Shane McMahon, son of WWE boss Vince McMahon, decided what to do: he set a match between Lashley and Strowman in which Strowman could earn the chance.

Lashley – who immediately tried to increase his chances of winning with an immediate attack on Strowman – then had the better end for himself in the end. He freed himself in a rare moment as Strowman’s Powerslam finisher and countered a second attempt victoriously.

The  Miz ‘attempt to attack Lashley from behind with the title also backfired: Lashley also handled the “A-Lister” and posed with its belt at the end of the show.

A title match between Lashley and Miz has been announced for the coming week.

– In the first match of the evening, the new US champion Riddle defended his title against John Morrison, whom he had pinned in the three-way battle the day before to dethrone Lashley.

The  celebrity-wrestler connection of rapper Bad Bunny and newcomer Damian Priest continues to cooperate successfully: Priest defeated Angel Garza, also because he was distracted by Bad Bunny, who then survived the attempt of several undercard Wreestlers to give him the 24/7 Remove title. Bad Bunny eventually threw former cruiserweight champ Drew Gulak out of the ring.

– As a result of the (real) pregnancy of Lacey Evans, not only Evans, but also legend Ric Flair seems to be out of the action for the time being: Daughter Charlotte gave him a lecture behind the scenes that she would do everything to stop being Ric’s daughter Flair, but to be recognized as Charlotte Flair and he stands in her way, he should really stay at home now. It seemed to be having an effect. Ric also put into perspective the impression that had been scattered last week that he (in the WWE story world) considers himself the father of Lacey’s baby.

– In addition, a replacement program for Flair has apparently been initiated: In a match against the tag team champions Nia Jax and Shayna Baszler, there was a misunderstanding with RAW women’s champion Asuka, who was accidentally kicked by Charlotte.

The  angry Japanese didn’t want her partner to help her up afterwards.

– Sheamus underscored his enduring ambitions for the WWE title with another victory: He triumphed in a remarkable duel over old rival Jeff Hardy.

Parmelin: “The pandemic has turned our lives upside down”