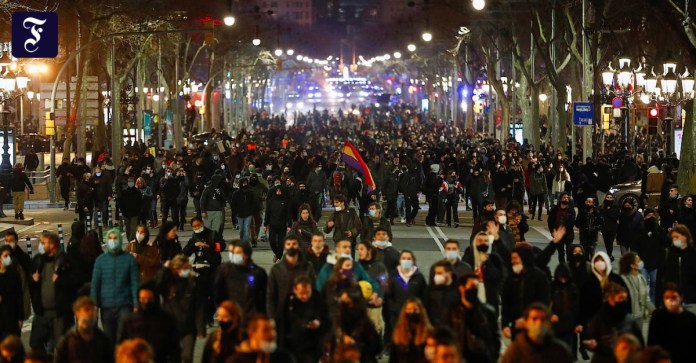 Dhe protests against the imprisonment of a rapper for insulting the royal family do not stop in Spain. Thousands of mostly young people took to the streets on Saturday evening for the fifth night in a row in various cities in the country to demand the release of the musician Pablo Hasél and more freedom of expression.  The re were also riots. According to police estimates, at least 6,000 demonstrators gathered in the center of the Catalan metropolis of Barcelona for the largest rally to date.

Participants again pushed dumpsters and other objects together to form barricades and set them on fire. Shop windows were smashed in the splendid avenue Passeig de Gràcia, shops were looted and stones, bottles, firecrackers and eggs were thrown at the police.

The  officers used batons and water cannons against the demonstrators. According to the newspaper “El Periódico” rubber bullets were fired again. A young protester lost an eye on Tuesday in Barcelona as a result of such a bullet.

Protests in Madrid too

The re were protest rallies on Saturday evening in the Spanish capital Madrid, Palma de Mallorca, Pamplona and, above all, in many Catalan cities, including Tarragona and Lleida, the hometown of Hásel. According to the regional authorities, at least 11 people were arrested in Catalonia alone. According to the rescue workers, a total of six people were injured, two of them in Barcelona. Around 400 people took to the streets in Madrid. Several police vans were parked in the main shopping street, Gran Vía, and a police helicopter circled over the demonstrators.

The  rapper Hasél, sentenced to nine months in prison for insulting the monarchy and glorifying violence, was arrested on Tuesday after he had refused to serve the sentence voluntarily. Since then there have been protests every evening in Spain.

The  32-year-old named former King Juan Carlos, who fled to Abu Dhabi after allegations of corruption and in view of judicial investigations, among other things, as a “thief” and built fantasies of violence against conservative politicians into his texts. He himself sees this covered by the freedom of the artist. On Thursday he was sentenced to another two and a half years in prison for allegedly threatening a witness in a trial against two police officers.

In the debate on the controversial conviction of the man, whose real name is Pablo Rivadulla Duró, Prime Minister Pedro Sánchez condemned the violence as “unacceptable” on Friday, but at the same time admitted deficits in the legal system.

The  Spanish democracy has the “upcoming task of expanding and improving freedom of expression,” said the socialist politician.

Berlin & Brandenburg: FDP calls for taxi vouchers for pensioners because...

Vodafone disruption in Germany: “Unusable” – customers rave in the morning...

Election in Catalonia: defeat of a winner