For years prices have been rising in the seven largest and most populous cities in Germany. A development that is likely to continue in the future.

However, there are some differences between Berlin, Düsseldorf, Frankfurt, Hamburg, Cologne, Munich and Stuttgart. What buyers get for their money and who lives in which city on the most square meters, McMakler, the Germany-wide local broker, has in a current one Real estate ranking of the German Big Seven for 2020 and 2019 analyzed.

Munich, which has long been the front runner in the cost of one square meter of living space, remains the undisputed most expensive of the seven A cities. At € 8,002 / m², the Bavarian state capital is well ahead of the average property prices in other major cities.  The  banking metropolis follows at a considerable distance and with an average price of 5,906 € / m² Frankfurt am Main. In third place is Hamburg with € 4,912 / m².

The  only movement in the ranking is in fourth and fifth place. Here, Berlin overtakes the previous fourth Stuttgart with 4,797 € / m², with 4,766 € / m². In the duel of the carnival strongholds Düsseldorf a bit expensive.

The  largest percentage increases when it comes to the purchase prices of residential real estate there are in Frankfurt am Main and in Cologne. Prices in the Main metropolis will increase by a whopping 13.9 percent in 2020 compared to the previous year, while in the cathedral city they will grow by a respectable 10.9 percent. Berlin follows in third place. In the capital, the average purchase price for residential real estate is increasing by 7.5 percent. In contrast, the gap between Hamburg and Munich in terms of price increases is smaller. With an increase of around 5 percent each, both are on par. Compared to the previous year, prices rose least in Stuttgart with 4.7 percent and Düsseldorf with 4.2 percent.

Real estate ranking: significant increase in value to be observed

“Our analysis shows a continued significant increase in value for properties in A-cities.

The  dynamic development in Berlin is particularly striking. Compared to the numbers from 2018, the capital has now overtaken Stuttgart in the price ranking. It can be assumed that within the next two years the average prices for Berlin real estate will also be higher than the prices in Hamburg, ”says Felix Jahn, CEO and founder of McMakler. Also Frankfurt is becoming more expensive clear. “In addition to the relocation of the financial sector from London to Frankfurt due to Brexit, the rather sluggish new residential construction is keeping the price pressure constantly high,” explains Jahn.

Real estate ranking: condominium or your own house?

Comparing the average sizes of those offered for sale in 2020 Freehold flats are right up there with 87 m².

The  apartments in Düsseldorf are noticeably smaller.

The  average condominium in Munich is clearly the smallest with 72 m². Nevertheless, the average Munich apartment at around 576,144 euros is still some ten thousand euros more expensive than the average larger apartment in Frankfurt am Main at 513,822 euros.

The  distance to fourth place, the cathedral city of Cologne, is clearer.

The re, buyers can count on an average of 171 m² in house offers. Houses in Munich offer a little less space. Here houses are usually 167 m². Even houses in Berlin belong in comparison to the more modestly tailored homes. Here buyers have to be satisfied with an average of 157 m² living space. With 145 m² of living space, houses in Hamburg are the smallest.

McMakler’s data collection is based on an evaluation of advertised purchase offers for houses and apartments (only existing buildings, year of construction up to 2018) of various real estate portals for the years 2020 and 2019. Since every property differs in construction year, location and equipment, these real estate prices are not a basis for an exact calculation of the price per square meter, but serve as a guide.

Also interesting: Garden with clay soil: How to get the best out of the earth.

Are digital apartment tours on the rise?

Are digital apartment tours on the rise?

Russia and Europe: A vaccine as a political toadstool 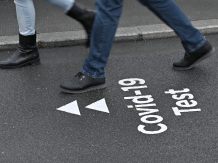 Frustration instead of lust: who has to write off the tour...