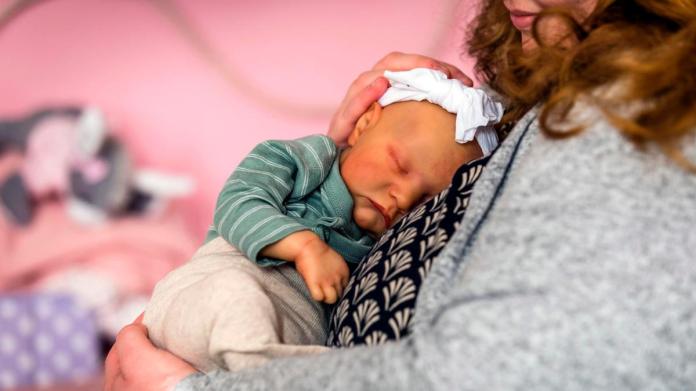 Lisa S. thought about it for a long time before she went outside with the little one for the first time. When the time came, Aimèe slept in the stroller, the fingers of her right hand clenched, the upper lip above the lower lip, everything as usual. Really always, because Aimèe looks like a real baby but is a doll.

Lisa S. knows that some people find their affection for the doll strange. That’s why she doesn’t want her full name to appear in this text, and that’s why she only made it into her own garden on the first outing with Aimèe.

The  neighbors have all looked anyway, and what they thought, S. could almost see: Where did she get the baby from?

Lisa S. is 29 years old and childless. At her home in northwest Germany there is a changing table and a cradle, burp cloths, bodysuits and mini jeans are in the dressers. She bought all of this for Aimèe and Faye, their two dolls called reborns that look very real.

All over the world there are artists who color the dolls’ baby complexion in dozens of layers, plant hair individually in the vinyl head and fill the body with granules until everything is as heavy as a baby.

Buyers wait months for the dolls and pay 400 euros or more for them. US TV shows in particular have determined how the majority of the scene is viewed. It seems somehow sick: grown-ups changing dolls, changing diapers, going out in prams. As great as the reborn fascination is, the irritation and rejection are just as great. Where does that come from, one like the other?

Lisa S. can understand that some people find their hobby strange. “It was exactly the same for me,” she says. It’s only been a year since she first heard of Reborns and was amazed. Nevertheless, she immersed herself in this doll world, saw videos of other women showing their days with the reborn babies and sometimes celebrating the unpacking of a new child for an entire hour.

The  people seemed so happy, had such a positive charisma,” says Lisa S.

The n the post brought her own reborn. In the first photo she uploaded to Instagram, the doll was wearing a bracelet with the date of its completion, a kind of birthday.

Originated in the USA, distributed worldwide

The  doll fever arose in a niche and is now also a significant economic factor. In the 1990s, tinkerers from the USA took apart halfway realistic baby dolls, re-colored them and put glass eyes in them.

The  head and limbs are mostly made of vinyl. Many Reborn women prefer classic fabric bodies for the trunk. And that’s what Alexander Meier saved the business.

Meier is the owner of one of the last doll manufactories in Germany, 90 percent of his business now makes up reborn bodies. He and his five employees produce 200 special fabric torsos a day, the shell for the doll’s body. “If you fill them well, they’ll be baby-like in your arms,” ​​says Meier. His business is volatile – fewer orders are placed when the weather is good.

He actually assumed that loneliness and boredom would result in more jobs during the corona pandemic. But in the first lockdown the vinyl parts, which often come from Asia, were missing, so his business also collapsed. All in all, says Meier, demand is consistently high. Many of those who bought the finished dolls are older women whose children are out of the house. “Why not”, says Meier. “Something is being played there. It’s not worse than a toy train in the basement. ”

It is difficult to check what Meier says about his customers because there is hardly any reliable data. Not about the size of the market, because reborns are handmade and many kits have mini editions.

The  number of collectors is also unclear.

The  German Reborn trade fair in Eschwege usually has around 1,000 visitors, the largest Facebook group in the world has almost 13,000 members.

The  women use the dolls very differently.

The re is, for example, Mary Zaun, a German YouTuber with more than 35,000 subscribers, who talks to her dolls in role-plays, puts them down for an afternoon nap or says about them: “You are very tearful today, I don’t know why either.” And there is Another German collector who uploads beautifully staged photos of her reborns on Instagram and says in an interview: “I see them more as a pretty decorative piece.

The y are in the closet and are only used for photo purposes if I have the time and inclination. ”

The re are women who want to get over an unfulfilled desire to have children, a miscarriage or a sudden infant death with reborns, but they are not the rule.

Canadian scientist Emilie St-Hilaire is one of the few who have studied these dolls scientifically. She is working on a doctoral thesis on the subject at Concordia University in Montreal. She did polls among reborers and found:

Most are female, come from almost all age groups, with the exception of children, women with and without children of their own keep each other in balance. Most of them simply enjoy working with the reborns, some use the dolls to reduce stress and because it helps them therapeutically.

Fear of malice and rejection

But it’s not just the scientific data that is missing. It’s also hard to get into conversation with reborn women. Many do not respond to inquiries, others say that there have been too many malicious reports. Doll owner Lisa S. talks about what fascinates her about her reborns. It is not easy to say why she does not dare to use her full name.

S. has hardly received any rejection so far. Her parents and friends support her hobby, or at least don’t condemn it. Other reborn women also report a relaxed private environment.

The  more public the space becomes, the more often there seems to be rejection. An artist who makes Reborns tells how she was berated by visitors at toy fairs because what she was doing was scary and sick.

But what makes people so irritated to react to reborns – almost as automatically as the dolls trigger rapture in their fans? “People find everything that is out of the norm weird,” says Lisa S. Researcher St-Hilaire sees it similarly: “Adults are expected to concentrate on their work instead of playing.”

The re are socially recognized ones Games. But: “

The re is still enormous pressure on women to become mothers. If they play with reborns instead, that is frowned upon and is considered abnormal. “

The rapeutic benefit or pathological delusion?

In fact, the assumption persists, according to collectors, that it is pathological to treat a doll like a baby. Lisa S. defends herself violently against this. “We’re not stupid, of course we know that these aren’t babies,” she says. However, playing with the doll helps her deal with her mental illness. S. suffers, she says, from depression and post-traumatic stress disorder, among other things. “It would be irresponsible if I had a child,” she says. And that probably won’t change either. “I can safely leave the dolls in the stroller for several days without being noticed.” When she plays with the reborns, holds them and looks at them, she realizes how good it is for her, how it calms her down.

The re are other female collectors who reborns help over a psychological crisis. But what is wrong with people comforting themselves with dolls instead of, for example, taking medication? A therapeutic benefit of the dolls has even been scientifically proven, at least initially, albeit with a different clinical picture. According to studies, reborns as therapy dolls can help make people with dementia more communicative, calmer and happier.

Lisa S. now goes outside more often with the stroller and her dolls. And she already knows what she would say if someone asked her about how strange and sick it was. Lisa S. would then want to know if that wasn’t a bit exaggerated. “It’s just a doll.”

Comment on the Brexit Trade Agreement – A Deal Against Chaos

No connection between death and vaccination in Switzerland – coronavirus –

Paris Hilton turns 40: a glamorous life with many downsides