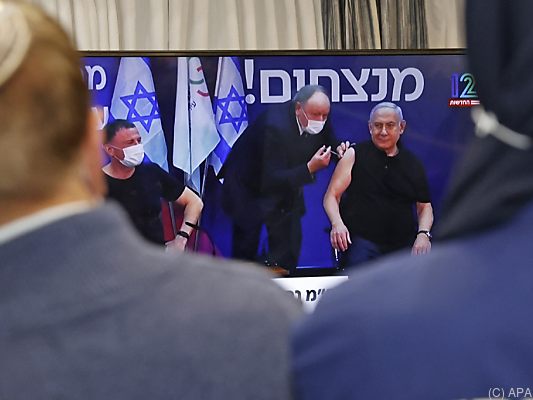 
Edelstein and Netanyahu were vaccinated live on TV
© APA (AFP)

Israel on Sunday introduced relief for citizens who have been vaccinated against the coronavirus or have recovered from illness. With a Green Pass you can visit fitness studios, hotels, theaters or sporting events, among other things. Health Minister Yuli Edelstein wrote on Twitter that more than 3.2 million Israelis could now enjoy these benefits.

The  aim of the easing for the two groups is also to stimulate the economy in the country again. “

The  Green Pass will gradually open the country again,” said Prime Minister Benjamin Netanyahu on Saturday evening. Israel with its 9.3 million inhabitants is considered a pioneer. Every citizen from the age of 16 can now be vaccinated.

In Israel, anyone who has recovered or who has been vaccinated can create a vaccination card online one week after the second vaccination. Personal information can be read using a simple QR code. Owners of such a vaccination card can then have a green passport issued, among other things via a special mobile phone app. In total, around 4.3 million first and almost three million second vaccinations have been given in Israel since December 19.

“Halloween Kills“ in the stream? “Sure, because the cinema is...

Steu / Koller race in Igls to an early overall World...