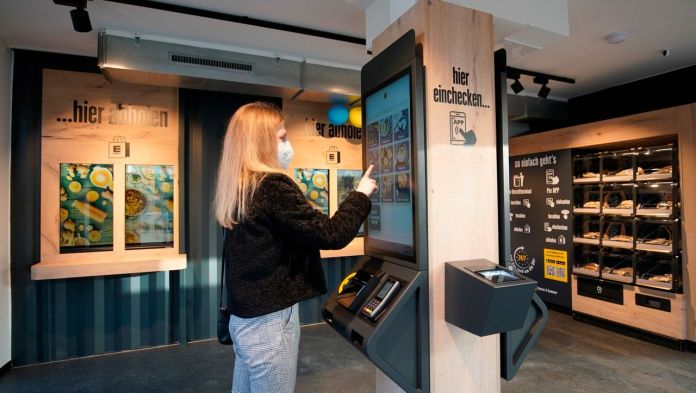 Will a walk-in food vending machine become the train station supermarket of the future? In a model project, Deutsche Bahn and Edeka have now opened such a completely digitalized mini supermarket at the train station in Renningen in Baden-Württemberg.
The  market is open around the clock and has no employees. Customers order and pay for the products using a smartphone app or at a machine. A mechanical system with robot technology searches for the desired goods and then makes them available at an output.

When the store opened, interested parties initially had around 300 different articles available. Later it should be up to 800 – including basic foods, chilled goods and drugstore items.

The re are already quite a few robot supermarkets

This is the first automated train station supermarket, but such digitized markets for various grocery stores have existed in other locations for a long time. For example from the Bünting company in Oldenburg: According to their own statements, there are more than 500 items in their “Combi 24/7” store, from fresh food to beverages, drugstore goods and tobacco products. »Herr Anton« is another company that offers digitized mini markets without employees in containers in Bochum, Emsdetten, Lengerich and Tecklenburg.

With »teo«, the supermarket chain Tegut also operates smaller stores without employees – here, however, customers take the products off the shelves themselves. In Switzerland, too, the Migros supermarket chain is experimenting with the first robot shops under the name “Migrolino”.

Half a million cost

The  railway put the investment costs for the supermarket vending machine at around half a million euros.

The  background to the test run is the wish of many travelers for better shopping opportunities at train stations.

The  state-owned company is working on the project with Edeka Südwest and the Stuttgart technology start-up Smark.

Renningen station is one of a total of 16 so-called future stations of Deutsche Bahn nationwide.

The  group wants to try out innovative offers at these selected stations.

Corona use of the police: 100 fools disregard hygiene rules at...

Instead of 9.99 euros for free today: This professional app is...

Brandenburg in third place among the new infections – government worried...