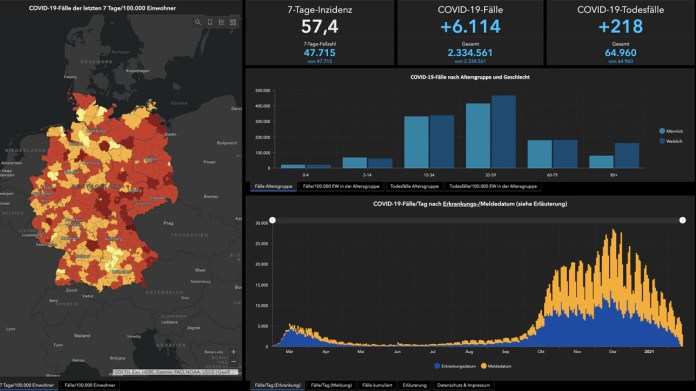 Berlin.  The  health authorities in Germany reported 6114 new corona infections to the Robert Koch Institute (RKI) within one day. In addition, 218 more deaths were recorded within 24 hours, according to figures from the RKI on Sunday. On Sunday, the number of cases reported by the RKI is usually lower, among other things because fewer tests are carried out on the weekend.

The  data reflect the status of the RKI dashboard from 5.30 a.m., changes or additions are possible afterwards.

Last Sunday, the RKI had recorded 8,616 new infections and 231 new deaths within one day.

R-value further below the critical value of 1

The  total number of people who died with or with a proven infection with Sars-CoV-2 rose to 64,960.

The  nationwide seven-day R-value was 0.90 according to the RKI situation report from Saturday evening (previous day 0.87). This means that 100 infected people infect 90 more people.

When assessing the measures, the capacities of intensive care beds, equipment and staff are also important.

This must be taken into account when assessing the infection situation

On November 11th, the RKI changed its recommendations for the test criteria. This means that only people with severe, corona-typical symptoms and contact persons of Covid 19 patients should be tested. This could increase the number of unreported coronaviruses because infected people with mild symptoms are no longer recorded.

Every Wednesday the RKI publishes the newly calculated positive rate in its situation report.

A positive corona test says nothing about infectivity

If a corona test turns out positive, it means that those tested have been infected with Sars-CoV-2. However, it does not mean that they are also infectious and can infect others.

The  level of infection risk depends on the amount of virus.

The  higher this figure, the lower the virus concentration and the less likely it is that the infected can infect other people.

The  RKI points out that the Ct value can vary depending on the sampling and test method.

You can find the latest news about Corona in our live ticker.

Angela Merkel cannot prevail in the fight against Corona

For the first time, Biden wants to appoint indigenous people as...

Italy: Alone at Christmas – 94-year-old calls the police to toast

Deutsche Euroshop shares in the red: prospect of resumption of dividend...