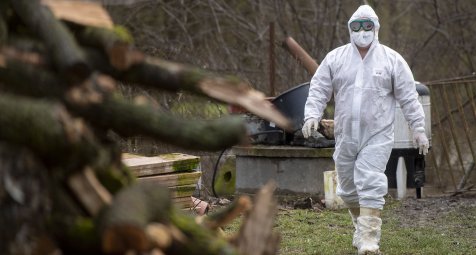 A veterinarian starts examinations on a small farm in the Chrudim region after the onset of avian flu. / picture alliance, CTK, David Taneèek

Moscow / Berlin – According to the authorities, the H5N8 bird flu virus was transmitted to humans for the first time in Russia.

The  World Health Organization (WHO) had already been informed about this “important discovery”, said the head of the Russian health protection authority, Anna Popowa, vorgetern. Scientists had detected the virus in 7 people in a poultry factory where bird flu had developed in animals in December.

The  seven workers from the poultry factory in southern Russia are now feeling “good” again, said Popova on Russian television.

The  disease ran without complications in all infected people. Popova praised “the important scientific discovery” made by employees of the vector laboratory. Time will tell whether the virus will continue to mutate. Since the virus is apparently not yet being transmitted from person to person, this gives “the whole world time to prepare for possible mutations and to react appropriately and in good time”.

The  WHO confirmed that it had been informed of the case by Russia and is seeking further information. If the information is confirmed, it is the first transmission of the bird flu virus H5N8 to humans, said a WHO spokesman.

The  WHO pointed out, however, that the infected workers had no symptoms of the disease and there are no signs of human-to-human transmission either.

In Germany, according to the Federal Ministry of Agriculture, 625 cases of bird flu have been confirmed in wild birds and 65 cases in domestic poultry. Although there is no evidence that the H5N8 viruses currently present in Germany could be transmitted to humans, it said.

The  Ministry is following the information from Moscow very closely.

The  Friedrich Loeffler Institute for Animal Health is in contact with Russian experts.

Klöckner pointed out that dead and sick birds should be reported to the responsible veterinary office. In itself, finding a dead bird in a field or in the forest is nothing special, said her ministry yesterday. However, if several birds have died at one location, it makes sense to inform the veterinary office. Dead birds should not be touched, warned the minister. Anyone who has touched them should disinfect their hands immediately.

Avian influenza, also known as avian influenza, occurs both in wild birds and repeatedly in poultry farms. It has also been proven time and again in Germany. As a rule, the H5N8 virus is fatal for birds, and no threat to humans has been assumed so far.

The re are several subtypes of avian influenza viruses, including the H5N1 virus, which can cause serious illness in humans.

The  last major outbreak of avian influenza in Germany and other European countries occurred in the winter of 2016/17. In the Federal Republic of Germany, hundreds of thousands of animals were culled in poultry farms in order to curb the action. © afp / aerzteblatt.de

Corona: Rapid tests at Aldi in Halver sold out after six minutes

CD Projekt RED: The turnaround share of the year

Close the door – and open your hearts

Money laundering paradise Germany – why is the state failing? ...