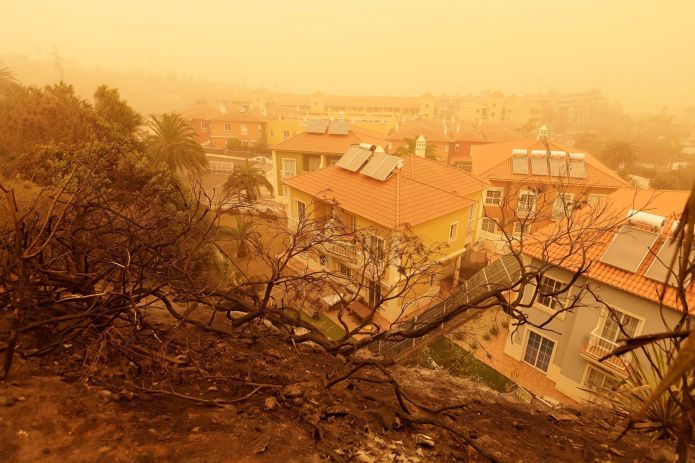 The re is also a magical first spring weekend behind Berlin – the temperatures have climbed all over Germany in the past few days.

The  reason for this is a special weather phenomenon: air currents bring masses of warm air from Africa via Spain and France to our country. A side effect is a gigantic cloud of dust that is carried into the country from the Sahara. Are we now threatened by red blood rain?

Sand trickles down from the sky, settles on car roofs

“Sand and dust were whirled up in the Sahara and then transported to Germany by the south-west current,” explains meteorologist Dominik Jung from wetter.net in a video on YouTube. Especially in the west, but also in other parts of Germany, it will be very cloudy today. “But sometimes the dust also trickles down, you can see that particularly well on the car paint.” Sometimes, influenced by such clouds of dust, an exciting weather phenomenon occurs: rain of blood! This occurs when the dust in the atmosphere is washed out by rain. But that is not to be feared at the moment, because according to forecasts there will be no precipitation in the coming days, says Jung.

Instead, spring continues to hit us with full force. In the past few days there were occasional temperatures of more than 20 degrees, the maximum value was measured at 20.4 degrees in Metzingen. And it continues warm – today, maximum temperatures of up to 20 degrees are expected again throughout Germany.

The  cold has receded far, it remains warm for now

The  cold has receded a long way and the way is clear for the warm south-westerly current. Hoch Ilonka ensures that the weather is friendly and dry, ”says Jung.

The  Sahara dust can still be felt because: “Clouds form on the dust particles, very thin clouds, but they cloud the sun and it stays a few degrees cooler.”

The  fact that there should be no rain can also have downsides. Because: “A major drought is in sight again by March 10th. Not good prospects in the middle of the spring growth phase, ”says Jung. And another onset of winter cannot be completely ruled out.

The  ensemble forecasts do not assume that there will be any more snow. Jung: “A March winter is not in sight for the next few days. At most at night there is ground frost in places. “ But as always, the weather is and will remain unpredictable.

USA after Thanksgiving: Highest number of new corona infections since the...

Premier League: Allardyce for interruption: “The last thing I want is...

Barack Obama: Daughter of Malia’s boyfriend was quarantined with you

Ethiopia: The conflict in Tigray is widening

Dominic Thiem after the gala performance against Dominik Koepfer in the...

Salzburg wants to score points in Munich without being naive

How the major economies are coping with the Corona crisis