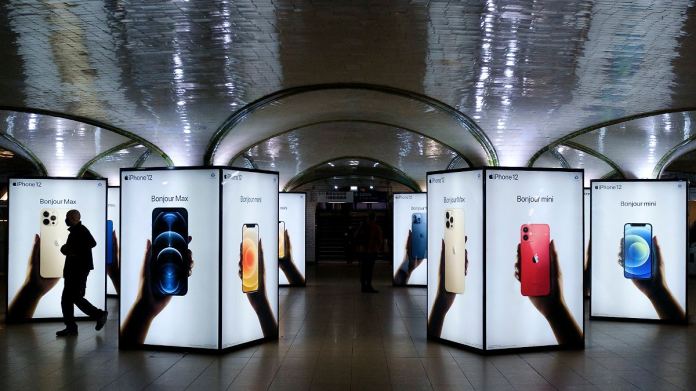 Many people around the world did without a new smartphone last year. When the new iPhone hits the market in the fall, they took it all the more courageously.  The  South Korean competitor Samsung has to give up its top position.
For the first time in four years, Apple has taken the lead in the smartphone market.

The  company sold a total of around 79.9 million iPhones worldwide from October to the end of the year, 15 percent more than in the same quarter of the previous year, according to the US market research company Gartner. Competitor Samsung from South Korea sold 62.1 million smartphones during the period. Overall, however, smartphone shipments fell by 5.4 percent in the fourth quarter.

The  Chinese manufacturers Xiaomi and Oppo follow in third and fourth place. According to Gartner, Huawei is in fifth place.

In 2020 as a whole, sales of smartphones worldwide fell by 12.5 percent to 1.3 trillion devices, as Gartner announced. Samsung remained number one in 2020 as a whole with a market share of 18.8 percent, followed by Apple with 14.8 percent.

The  analysts assume, however, that the industry will record growth in the current year.

Biathlon World Cup 2021 in the live ticker today: The relays...

FFP2 masks apparently only in gondolas

TV out of “For Heaven’s Sake”: This is how his friends...

Office concept for the administration building of the railway in Frankfurt

Young women want to get a corona vaccination

Final spurt on the way to the top of the town...