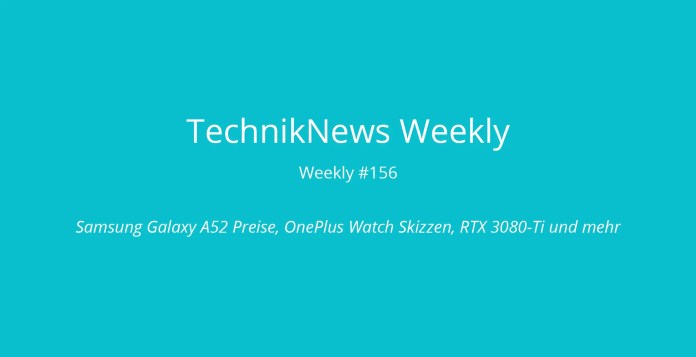 A week with many articles on TechnikNews comes to an end. Among other things, we were able to provide you with prices for the Galaxy A52 (5G). Time for us to review everything here in the TechnikNews Weekly.

A little hint before we start with last week’s news. Our colleague Kenneth Fritsche will moderate the eighth edition of the TechnikCast at 7 p.m. today. He goes into the events of the last week and tells us about his experiences with the Samsung Galaxy Note20 Ultra.

Prices for the Samsung Galaxy A52 (5G) in advance

Our in-house expert for leaks Nils teamed up with Techcheck once again.  The y were able to find out the prices of the upcoming Samsung Galaxy A52 and its 5G variant.

The  normal variant (LTE, 128 gigabytes of memory, 6 gigabytes of RAM) should cost 349 euros according to our information.

The  same configuration with 5G should go over the counter for 449 euros. We assume that the variants with 8 gigabytes of RAM and 256 gigabytes of memory will be sold for 50 euros more each.

As has long been known, OnePlus could sooner or later introduce its own smartwatch. Sketches for this have now appeared at the DPMA (German Patent and Trademark Office).

The se suggest that OnePlus would like to bring out a “normal” smart watch and a watch designed for sports. You can read about how these could look in this article:

The  Nvidia RTX 3080-Ti is delayed one more time. But that’s not all, the performance is likely to be reduced a bit. Means that instead of 20 gigabytes of VRAM there should only be 12 gigabytes. We don’t really know why that is.

The  graphics card manufacturer will probably lower the prices a little.

Is it getting serious for you?

According to Laumann, no curfews in NRW – surprise in OWL

Germany is heading for an extension of the lockdown