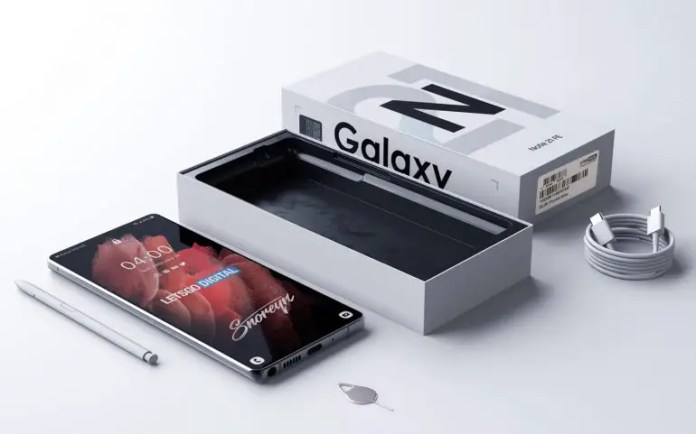 Samsung Galaxy Note21 – Design Concept Drafts give a first impression – Official images for the upcoming Galaxy Note21 series are not yet available and it will probably take a while until the relevant materials are available. Designer Giuseppe Spinelli has already created concept drafts for LetsgoDigital that show what the Note21 could look like with the Galaxy S21 design.  The  pictures already look very professional, but of course they are not yet official materials and therefore the real devices will differ a little.

The  original pictures are available directly from letsgodigital.

The  designer has also remained rather spartan when it comes to accessories. Apart from the cable, there is no charger or headphones – so it is assumed at this point that Samsung will maintain the course of the Galaxy S21 with the Note21.

The re is bad news with the camera for the front. It now seems as if Samsung will bring this technology to the Galaxy Z Fold 3 models first, so it remains to be seen whether the Galaxy Note21 will also get this technology.

Samsung Galaxy Note21 – camera under the display is being tested

It is now a nice tradition that the rumor always comes up with the next top models that this time the front camera will disappear under the display. This was already the case with the last top models from Samsung and also with some other manufacturers – but has not yet proven to be true.

The  Samsung Galaxy Note21 now has similar information again. Samsung is currently testing two approaches in this area: the well-known display with a punch hole and opening for the front camera and a camera under the display, which would then no longer require an opening in the screen. So the company is probably not yet sure which solution to prefer, but at least there seems to be a chance of a camera under the screen.

But the last sentence already indicates that the known problems with this technology still exist. Due to the additional glass in front of the lenses, the quality of the recordings is lower than with normal systems and the risk of contamination is higher.

The  cost factor also seems to play a role: Cameras with this technology are still expensive and would possibly drive up the prices for the models again. Samsung could possibly do without other expensive technology, but that is a consideration of what users prefer and what they don’t. For cost reasons, for example, Samsung has now used plastic backs in some areas even for its top models – this is not well received by many users. Overall, new functions could do the Samsung models well – but whether the camera under the display is such a big step forward can at least be questioned.

The refore, one should keep in mind that Samsung will continue to work on the camera under the display – whether this technology will be used on the Samsung Galaxy Note21 in autumn next year is still uncertain and can currently hardly be estimated.

Democrat over Trump: “Corrupt to the end”

He has this great wish for his birthday

Berlin & Brandenburg: FDP criticism of the number of vaccination doses:...

Coronavirus in the capital: Kalayci expects only 585,000 vaccine doses for...