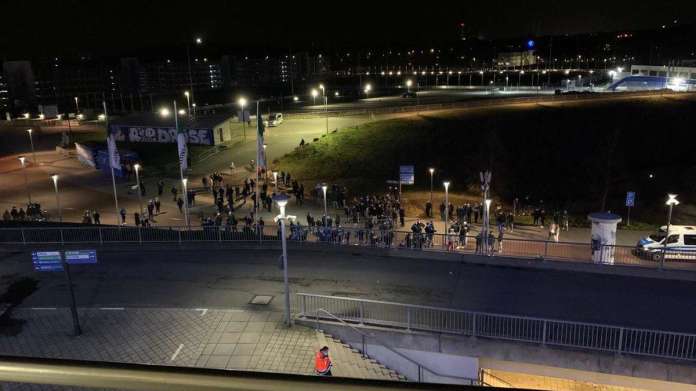 FC Schalke 04 lost the derby against BVB. Afterwards, hundreds of fans gathered at the Veltins Arena.

The  Gelsenkirchen police have now drawn their balance after the derby in the Veltins Arena.

The  emergency services also commented on the incidents following the game between FC Schalke 04 and BVB.

According to the police, around 200 people were in front of the Veltins Arena. “A larger group of people tried to climb over a fence in the area of ​​a cash register and get into the arena,” says the report.

FC Schalke 04: Police initiate 20 proceedings against fans in front of the stadium

The  police officers prevented this with “simple physical violence”, pepper spray and batons. According to the police report, no persons were injured.

The re were no arrests, and no fan was taken into custody.

FC Schalke 04: Big gathering of fans after the game against BVB

The  S04 lost the Bundesliga derby 4-0 against BVB on Saturday evening (February 20th). Immediately after the end of the game, many gathered Fans the “squire” in front of the Veltins Arena.

FC Schalke 04: Over 200 fans are waiting for the S04 team in front of the Veltins Arena

Most recently there were violent protests by Schalke Ultras against sports director Jochen Schneider (50) at the office, which is also located on the club’s premises. After this Derby seem the Fans now to have to talk again.

Over 200 fans waited in front of the main entrance of the Veltins Arena for the team and those responsible for the FC Schalke 04to confront them. That didn’t come as a complete surprise, after all, the S04 lost the most important game of the year from the fans’ point of view and stumbled towards relegation to the Bundesliga.

FC Schalke 04: Fans wanted to storm the Veltins-Arena after the Derby bankruptcy

As with every Bundesliga game, there were already emergency services from police on site to prevent worse and to monitor the situation. Some followers are said to have even tried to have an entrance gate to Veltins Arena to storm to get inside the stadium.

How Sport1 reported, the police counteracted with a human chain, according to the Funke media group even came Batons for use. Many a fan then turned away.

As RUHR24 knows, there were also parts of the fans among the fans organized fan scene the royal blue. That also confirmed Sky-Reporter Dirk Große Schlarmann. So shows a video on Twitterhow a large group headed towards the hotel near the stadium Veltins Arena running.

FC Schalke 04: Video shows a large group at the Veltins-Arena

Just over an hour after the game against BVB had ended, it was all over Veltins Arena then again relatively calm.

The  journalists admitted to the stadium were initially even asked to remain in the press stand due to the crowd and were not allowed to leave the stadium.

After the argument with the police, the Fan group according to RUHR24 information on the way to Parking lot for the players of FC Schalke 04 made to confront the professionals there.

Around 9:34 p.m. a large column of cars drove around the ring Veltins Arena in the direction of the exit, possibly with the players in the vehicles.

The  journalists present were asked to take a different exit.

The  gate to the media parking lot has been closed.

FC Schalke 04: Fan group made their way to the parking lot of the S04 professionals

A short time later, the situation around the stadium finally calmed down. It’s the end of one Derby daywhich had actually started well from a fan point of view. On Saturday morning, FC Schalke 04 presented the special message of a fan campaign.

On the south curve, the “Blau-Weißes GEsocks Waltrop” fan club had the logo of the with the help of thousands of T-shirts S04 molded on the seat shells.

The  action should serve as motivation, after all, fans are currently not allowed in the stadiums. However, none of that helped:

Corona in Offenbach: Stricter rules from December – These measures apply 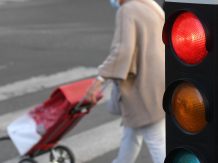