For the Vienna Capitals, tomorrow is halftime in the pick round. Austria’s capital club meets in the fourth of eight inter-round duels the EC Red Bull Salzburg.

The  Caps, yesterday without play and currently in third place in the table, want to take the momentum from the 11: 3 victory at Hydro Fehervar AV19 and continue their series. Because Vienna is the only team in the current pick round to have scored points in every game so far. Face-off is tomorrow at 7:15 p.m.

Highest win of the season thanks to a great team performance
Two points against the second EC-KAC, one against table leaders HCB Südtirol Alperia and a full three against Hydro Fehervar AV19.

The  spusu Vienna Capitals got the most points of all top 5 teams in the pick-round.

The  first full success was also the highest of the current season. Hydro Fehervar AV19 were beaten 11: 3 away last Friday. “It was a great team effort. We didn’t take off the gas, no matter how high we went. None of the meanders returned, we played our system for 60 minutes. That was very positive and of course it also gives confidence for the upcoming games ”, Fabio Artner looks back on the third highest win in the 20-year history of the spusu Vienna Capitals.

The  21-year-old self-made striker and graduate of the Vienna Capitals Hockey Academy turned the game around with his goal to make it 2-1 in a duel with the Hungarians.

Newcomer Besse with a successful premiere
But not only Artner appeared in the statistics in the 11-3 victory, but also Grant Besse.

The  Caps newcomer, who moved from Allsvenskan to Kagran, scored in his first game for yellow-black and also recorded three assists. “Of course, the most important thing was that we clinched a win.

The  eleven goals speak for the performance of our team. For me personally, the debut was of course ideal. I felt comfortable from the first change and was able to contribute my part to the success. ”

At his premiere appearance, Besse not only impressed with good technique and overview, but also with a noticeable serenity on the puck. “In principle, I’m a quiet guy and I take this calm with me on the ice. I try not to rush things, but to use the time I get wisely. That is probably also the reason why I often seem very calm during the game, ”explains the 26-year-old American.

The  always emotionally charged duel with EC Red Bull Salzburg is waiting for Besse and his teammates tomorrow.

The  spusu Vienna Capitals lead 3: 1 in the Season Head 2 Head. After three 4: 1 successes in a row, head coach Dave Cameron’s team had to admit defeat to Eisbullen 2: 4 in the last basic game. “Some of the names in the Salzburg squad sound familiar to me from my time in the DEL. For example Austin Ortega, Jack Skille or Stefan Espeland. Salzburg have a lot of good players. But in the end the focus has to be on our game. We want to build on the good performance against Fehervar and go into the game with the same attitude, ”said Besse, who scored 36 points in 48 games for Krefeld in the DEL last season (20 goals, 16 assists).

Take a close look when buying: How safe are FFP2 masks?

Prince Philip: See you next week in the hospital – without... 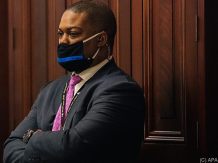 Record high: Bitcoin rally continues with a jump above 23,000 US...