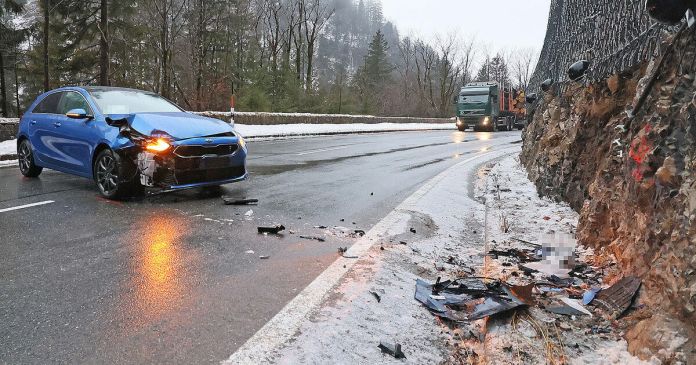 In a traffic accident this morning, a 23-year-old car crashed head-on into the rock face on the Alpine road in Schneizlreuth (LKR BGL).

A car driver skidded with her Kia on Tuesday morning around 7:20 a.m. on the German Alpine Road (B305), which was in places very slippery due to snow, rain and ice, near the so-called Wegscheid at the Antoniberg tunnel and crashed head-on into the adjacent rock face.  The  Bavarian Red Cross reported on Tuesday.

Fortunately, the driver was only slightly injured

Other road users took care of the young woman and made an emergency call.

The  ambulance crew of the Reichenhaller Red Cross took care of the slightly injured according to the first assessment and then brought them to the Bad Reichenhall district clinic for further examination.

B305 in Schneizlreuth closed for almost an hour

Officials of the Reichenhaller police recorded the course of the accident.

The  B305 was completely blocked for a good three quarters of an hour due to the car standing sideways, with traffic jams in both directions.

The  Kia was no longer ready to drive and had to be towed.

Harry and Meghan at Oprah – the British react “hysterically” –...

Giessen: Well-known hairdresser chain is insolvent – several branches in the...