Roppen – A large-scale search came to a happy end on Saturday afternoon: A 24-year-old Slovakian who had been reported missing in Roppen the day before was found unharmed. He had retired to a friend’s hut for “private reasons”.

Firefighters, police and water rescue workers had been looking for the man since Friday because his girlfriend had reported him missing. She had wanted to pick up the 24-year-old from work on Friday afternoon, but did not meet him. Since she couldn’t reach him on his cell phone either, she worried. Acquaintances and friends started looking for the 24-year-old on Friday – without success. Later, the Roppen volunteer fire brigade, the rescue dog brigade, police helicopters and police patrols moved out to look for the missing person.  The se actions were also fruitless for the time being.

On Saturday, the Slovak was finally found hypothermic but unharmed in a friend’s hut. He was taken to the hospital in Zams. (TT.com)

Need a complete lockdown – even before midweek

It will continue to snow in Berlin

Zurich Gold Coast: This murder case would not be in court... 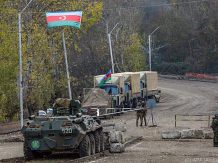