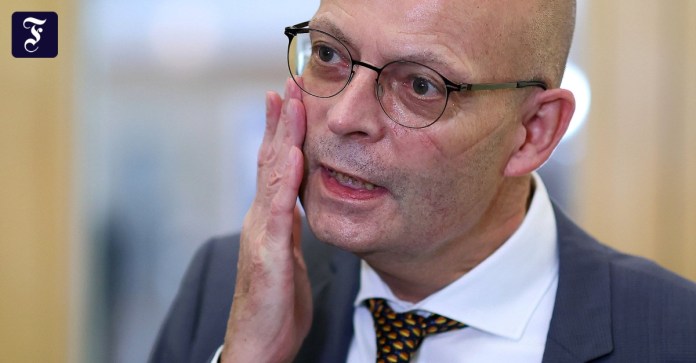 In the affair of premature corona vaccinations, the public prosecutor’s office in Halle an der Saale had the office of Lord Mayor Bernd Wiegand (independent) searched. Wiegand was suspicious of having made vaccinations possible for himself and others in disregard of the vaccination sequence, the investigators said on Monday. It is possible that the criminal offense of embezzling embezzlement is present.

The  search in Halle was probably the first nationwide in “such a thing”, said a spokeswoman for the public prosecutor.

Wiegand had admitted that he had already received a vaccination against the coronavirus, although it was not yet his turn. Several Halle city councils and members of the disaster control team have also been vaccinated.

The  mayor justified the early vaccinations with the fact that leftover vaccination doses should be saved from destruction. He said he had been called at home in January because no one else was available for a spontaneous vaccination at the time. Wiegand had not made his vaccination public immediately, but only at the beginning of February, as did the vaccination of members of the civil protection team and city councils.

The  public prosecutor’s office announced, however, that vaccine residues could only be vaccinated in the intended order.

According to the investigators, the search at Wiegand continued early Monday afternoon and includes his office, the offices of the city health department and the vaccination center. As the public prosecutor explained, there is an initial suspicion of a criminal offense.

The  search does not mean a prejudice, the presumption of innocence applies.

Wiegand accused Saxony-Anhalt’s Minister of Health, Petra Grimm-Benne (SPD), of negligence because she had not yet regulated how to deal with vaccine residues. “To declare our approach illegal and publicly denounce it is simply ducking away by shifting the responsibility onto others,” criticized Wiegand in his statement on Sunday. He has been the Lord Mayor of Halle since 2012.

After the allegations became known, the state administration office in Saxony-Anhalt initiated disciplinary proceedings against Wiegand and two district administrators in the Saalekreis and the Wittenberg district on Friday.

The  Wittenberg district administrator Jürgen Dannenberg (left) was vaccinated before the official vaccination start on Boxing Day. He also countered critics that he had received leftover vaccine from a test run.

The  district administrators are accused of having violated civil service obligations by vaccinating against the specified order. In total, at least 585 cases were reported to have violated the prioritization specifications. In addition, the mayor is said to have violated civil service obligations “with untruthful statements”. In other federal states, district administrators, police officers and church representatives were vaccinated prematurely. Showdown in Congress – US media: Mike Pence refuses to help...

Covid-19 mutation: The Netherlands prohibits passenger flights from the UK