Speaking of sponsors, it should be noted that Sergio Perez has of course also brought some to Red Bull.  The  team has announced a new collaboration with America Movil, the telecommunications group owned by Perez ‘benefactor Carlos Slim.

The  group also includes the brands A1, Telcel, Infinitum and Claro.

“We’re looking forward to racing in two of America Movil’s most important markets, Mexico and Brazil. We really missed the incredible atmosphere of these events last year,” noted Christian Horner.

The  Group’s head of marketing emphasizes: “We are very happy to continue to support Sergio Perez, now we’re doing it with Red Bull.” 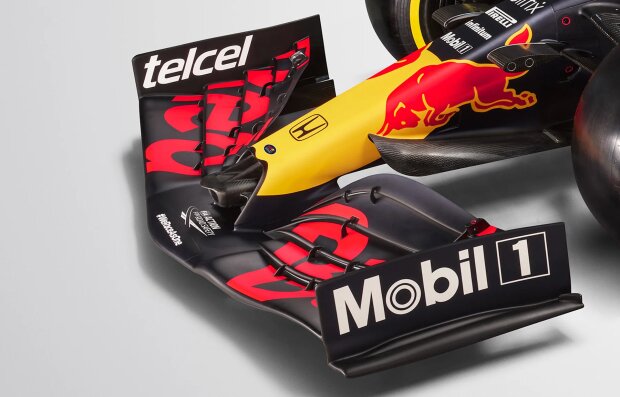 Longstanding Schumi sponsor back in F1

Incidentally, Mick Schumacher is bringing a sponsor back into Formula 1 who was already on his father Michael’s helmet 25 years ago: Deutsche Vermögensberatung (DVAG).

The  well-known logo will also be featured on his cap. “It touches me to know that the name Schumacher has been close friends with DVAG for a quarter of a century,” said Schumacher.

He thanks you for your loyalty. “With his extreme willingness to perform, his will to learn, but also his down-to-earth attitude, he embodies values ​​that have connected his father and us for more than two decades,” said Robert Peil, member of the board.

Now we come to another driver who will drive in Formula 1 in 2021: Mick Schumacher.

The  German will make his debut with Haas. It is not yet known when its first bolide will be presented. Nevertheless, there are already early praise for the 21-year-old. His former teammate in Formula 3 believes that Schumacher will “absolutely enrich” Formula 1.

In an interview with ‘ran.de’ Maximilian Günther speaks in the highest tones about the Schumacher offspring. “It’s just something special to see a driver by the name of Schumacher in a Formula 1 car,” he admits. In 2017 he had the pleasure of being a teammate from Schumacher.

The  two had a “very good relationship”.

Briatore: That’s why he wanted to lock Alonso up

Flavio Briatore, once the dazzling Formula 1 team boss of Benetton and later Renault, has spoken out about Fernando Alonso’s comeback. In a video interview with Peter Windsor, he talks about the two-time world champion’s bike accident and his chances with Alpine 2021.

“Fernando is very fit – apart from his bicycle accident. I speak to him almost every day and I told him to stop riding this racing bike because it is very dangerous,” said the Italian.

“I told him: If you don’t stop, I’ll lock you in the garage – you and not the bike.” Fortunately, the crash with the racing bike ended well, apart from a small fracture in the upper jaw Alonso was uninjured. He’s already training hard again – and he’s also documenting it on social media.

How will Sergio Perez fare at Red Bull?

Most observers ask themselves this question before the start of the season. We spoke to an expert who knows the Mexican from his youth: Peter Mücke. Perez drove in Formula BMW for the successful team boss in the substructure of Formula 1. Can the move to Red Bull be successful?

“Yes, I think so, because his mental strength is someone who faces Verstappen. Of course, Verstappen is a tough nut to crack, there is no doubt, but I think he already knows what he is doing and what to expect. And that was the best deal he could get, there is no question about that. It will be interesting, “said Mücke in an exclusive interview with my colleague Sven Haidinger.

You can read more about this on our website soon!

As of this Tuesday, we were presented with four cars: the McLaren MCL35M, the AlphaTauri AT02, the Alfa Romeo C41 and the Red Bull RB16B. We have collected all four cars again in this photo series – click now!

– McLaren team boss Andreas Seidl revealed to us in an exclusive interview a few days ago why his squad’s season goal is so vaguely worded.

– Daniel Ricciardo has also confirmed that he has signed with the British for three years.

– We have already published a large technical analysis of the Alfa Romeo C41. In it we explain what the changes to the racing car mean for 2021.

– We also took a look at how the former Sauber team is planning the further development of the new car.

Which teams present their cars and when?

McLaren, AlphaTauri, Alfa Romeo and Red Bull have already done it, six Formula 1 teams are only just dropping their covers. Are you wondering when we will see the next new car?

We have an overview for this: All presentation dates at a glance!

Spoiler: Ferrari is celebrating a launch on Friday, but we won’t see the new red goddess until March 10th.

Perez: This is what his new helmet design looks like

Sergio Perez has just presented his new helmet design. “Yellow has always been my color, but in the past I always had to wear a pink helmet,” he says.

The  design is dominated by yellow, and the Mexican flag must not be missing on the top.

“It’s especially nice because you can see it from the onboard camera when I’m driving. That’s why the flag is always present on the top. For me as a Mexican it’s something very special.”

In addition, the motto on the back of the helmet says: “Never give up.” Every time he puts on the helmet, he is reminded of this saying, says Perez. “It’s just a memory.”

The  new Red Bull under the microscope

We have of course been working on an initial analysis of the Red Bull RB16B since the first pictures were published. My colleagues Christian Nimmervoll and Daniel Windolph made this video.

You can find out what’s new about the Verstappen racer and what we can expect from Red Bull this week. Have fun!

And don’t forget: It’s best to subscribe to our YouTube channel right away and never miss a new video!

Launch Red Bull RB16B: This is what the car looks like!

Red Bull has presented its car for the 2021 Formula 1 season, and in this video we provide the first pictures of the new RB16B More Formula 1 videos

Romain Grosjean is currently doing his first IndyCar test in the USA on the Barber track. He is back in the cockpit three months after his terrible fire accident in Bahrain. He wears a special helmet: the design that his three children had actually designed for their dad for their Formula 1 farewell in Abu Dhabi.

Since Grosjean was unable to contest his last Formula 1 race due to the injuries, he had to wait a little longer to finally be able to use the helmet design.

The  helmet design will also be used at the IndyCar season opener on April 18th.

Red Bull has now announced that the team will do the first laps with the new RB16B tomorrow, Wednesday. Max Verstappen and Sergio Perez will be able to test the new car during a film day in Silverstone – however, according to the regulations, only 100 kilometers are allowed.

Alexander Albon will also be present, he has been demoted to test and reserve pilot and will be allowed to accelerate tomorrow in the RB15 from the 2019 season.

The  Japanese is Helmut Marko’s new darling, who also appreciates the talent’s humor. We get a first taste of it today on Instagram.

AlphaTauri does its first laps with the AT02

On Friday AlphaTauri presented the new car from Faenza. Pierre Gasly and Yuki Tsunoda’s AT02 was presented in Salzburg. Today the new racer is already doing its first laps in Imola.

Speaking of Ferrari: newcomer Carlos Sainz has taken his sponsor, the Spanish beer brand Estrella Galicia 0.0, to the top team. It became known yesterday. Before that, the brand was already represented at McLaren and Renault, the racing driver’s previous career stages.

We reported about it yesterday: Pirelli is testing the new 18-inch wheels with Ferrari in Jerez, which will be introduced in 2022.

The  Italians are back on track today too.

The  track dries up, so today intermediates are used first and then dry tires.

The  Alpine racing team, formerly Renault, today announced the extension of its partnership with Mecachrome.

The  French factory team relies on the technology group’s support for the manufacture and assembly of the V6 engine.

Laurent Rossi, Alpine Managing Director, explains: “Working with a historic partner like Mecachrome is an asset to our project to return to the highest level in Formula 1. Continuity is a strength in this highly competitive and ever-changing sport. We can look forward to many success stories. ”

Berlin-Kreuzberg: Several people injured after being shot – numerous officers on...

Young CDU women on the party and the three candidates for...

Commentator – “Would have understood the demolition”

Police light check in Stuttgart: When the lights are on on...