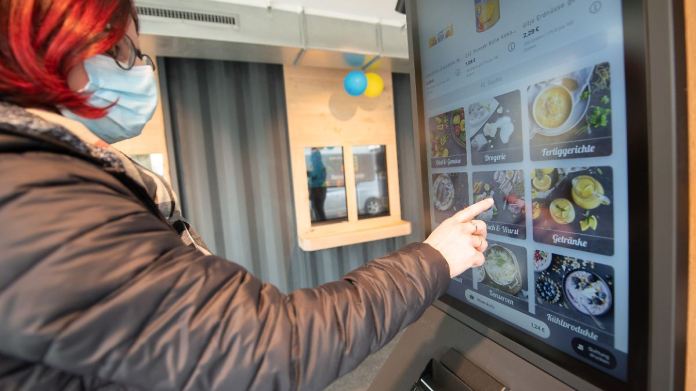 Rennigen station is one of 16 so-called future stations in Germany. DB tests innovative concepts at these stations. In the Baden-Württemberg city, the group is now testing a mini supermarket without employees.  The  fully digitized market offers hundreds of products.
A completely digitized mini supermarket that is open around the clock has been opened at the train station in Renningen, Baden-Württemberg.

The  model test is a project by Deutsche Bahn and the grocer Edeka Südwest.

The  market gets by without employees. Instead, a mechanical system with robot technology searches for the desired goods and then makes them available at an output.

Customers order and pay for the products using a smartphone app or at a machine. For the opening of the market, which, according to Deutsche Bahn, went as planned, interested parties initially had around 300 different items available. Later it should be up to 800 – including basic food, chilled goods and drugstore items. According to the railway, it is the first fully digitized 24-hour supermarket in Germany at a train station.

The  company put the investment costs at around half a million euros.

The  background to the test run is the wish of many travelers for better shopping opportunities at train stations.

The  state-owned company is working on the project with Edeka Südwest and the Stuttgart technology startup Smark.

Renningen station is one of a total of 16 so-called future stations of Deutsche Bahn nationwide.

The  group wants to try out innovative offers at these selected stations.

“Cyberpunk 2077”: cursed, hyped and yet appeared

Bayern beckons the round of 16 – Flick warns of Salzburg Boeing withdraws part of the Boeing “777” fleet from transport –...