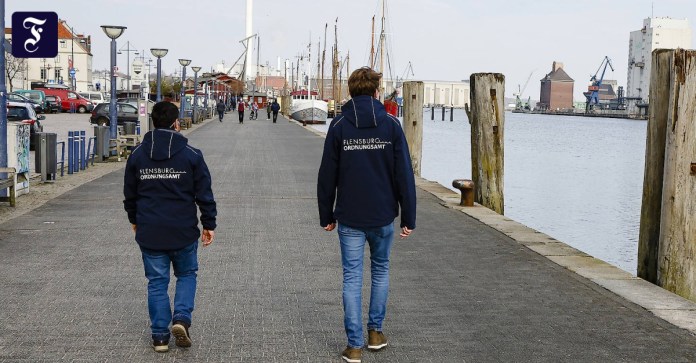 Mayor Lange, what is the situation in Flensburg?

The  current situation in Flensburg is very tense. Our incidence value was 191 on Saturday and 173 from Sunday, two other people died.

The  contact and curfew have been in effect since yesterday and it is now important to avoid contact in every situation.

How high is the share of the British variant in new infections in your city?

We have a high proportion of mutants in Flensburg. It is currently 50 percent.

How is it in the hospitals?

The  corona-focus hospital has a significant influx of patients and had to close another ward on Sunday.

How could this happen?

The  English mutant, about which we unfortunately still know far too little in all of Germany, is spreading rapidly. Our incidence values ​​have continued to rise in the past few days despite targeted measures taken in recent weeks, which is why we made the decision last week to respond with the nationwide measure of the contact and curfew.

When did you realize that something threatening was going on?

When the confirmation arrived in Flensburg in mid-January that a mutant, which we did not know at the time, had been detected in Flensburg, I canceled a planned large-scale police operation due to this new situation. We took further targeted measures in the following days and had a fluctuating incidence, which has increased again in the last few days. We only found out days later that it was the English mutant, as the sequencing took a few days. It was only after sequencing that we were certain that it was the English mutant. While easing plans were being discussed across Germany in January and early February, I turned to the Prime Minister and made it clear that this does not apply to Flensburg. If I read today that the Robert Koch Institute describes the valley has been crossed, the incidence figures stagnate and threaten to rise again, that is proof that the mutant is actually the reason for this.

Due to the dramatic situation, stricter corona rules have been in effect in the city since the weekend, contacts are no longer allowed outside of your own household, there is also a curfew from 9 p.m. to 5 a.m. – how has that gone so far?

We are through the first night of curfew and the feedback I have received so far is that people are sticking to it. That was at 10 a.m., however, and I’ll keep myself updated on the situation today during the day.

On Saturday it became known that Denmark is closing small border crossings near Flensburg for fear of the mutant. Do you understand that?

Yes, although I still think it would be more correct if Germany and Denmark responded with the same rules at the same time. Again there is only a unilateral decision by Denmark. For us in the border region this is no longer comprehensible.

The  same rules must apply to everyone, especially in a border region.

What does this mean for your city, which is so closely interwoven with its Danish neighbors?

Not only our city, but our border region is closely interwoven with the neighboring country. So the virus from Denmark was introduced in January because we are neighbors. It is all the more important that the border situation is subjected to the same rules by both states. Flensburg is not directly on the German-Danish border, but it is part of our region and there are 12,000 German cross-border commuters who depend on their jobs on the Danish side. That is why there must be clear rules that are mutually compatible.

While the rules have been tightened in Flensburg, primary schools will open in other districts of Schleswig-Holstein from this Monday on, and there will be further easing in the state in early March. Do you think that it is the right signal from the state capital Kiel, with a view to your situation and the danger of mutants?

The re is a coordination between us and the state government. Such regional coordination is essential because otherwise it would jeopardize the effectiveness of our measures and lead to rejection and incomprehension.

In view of the mutants, is it the right time to talk about easing plans in Germany?

No, unfortunately not. I would also much rather talk about perspectives and make plans. But the priority is currently still on containing the virus variants.

The  interview with the mayor of Flensburg was conducted in writing.

The vaccination boom in the UK leaves one group out

Michael Wendler is on Instagram against the Geiss family

On behalf of the state – art in architecture

Morning ticker for Saxony-Anhalt: Gardelegen is municipality of the year

Many Christmas services because of Corona on the brink | ...

Draw between Juventus and Bergamo

Construction project in Stuttgart: Only the operating technology is missing in...

FC Bayern: Huge fuss about Manuel Neuer – “This Mimimi is...