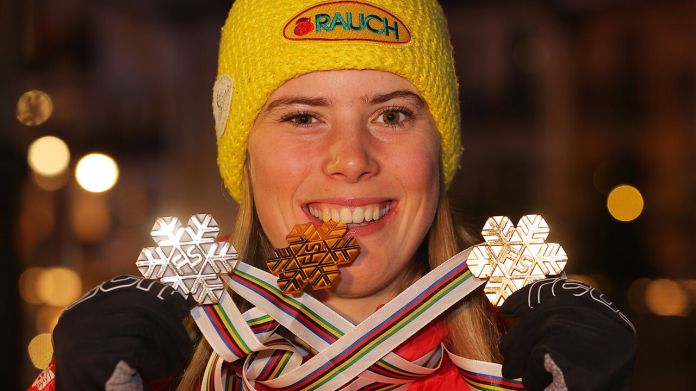 After two weeks of action in the Dolomites, the 2021 Alpine World Ski Championships in Cortina d’Ampezzo is history again. If in the first week initial cancellations due to weather conditions clouded the event, the rest of the World Cup became a hit.

But where there are winners, there have to be losers.

The se are the tops and flops of the Alpine World Ski Championships 2021:

The  ÖSV team has clearly exceeded expectations. At the first World Cup without a precious metal magnet Marcel Hirscher, the Austrians won five golds, one silver and two bronze medals – a total of eight medals. Above all, the gold yield is above the expected value. For women, ÖSV President Peter Schröcksnadel set the bar low, then Katharina Liensberger surprised him with two gold and RTL bronze medals. Speaking of which:

The  two medals in the giant slalom, the red-white-red Achilles heel, were probably only expected by the most daring optimists.

NERVE STRENGTH: Liensberger, Vincent Kriechmayr, Marco Schwarz, Adrian Pertl – for all Austrian medal winners it is true that their potential has long been apparent and has now fully developed on the big stage. Kriechmayr and Schwarz had already celebrated victories in the World Cup, but Liensberger was at the top for the first time in Cortina. Pertl also surpassed his best World Cup result as second in the slalom. This shows the coolness and mental strength of the ÖSV athletes.


MIKAELA SHIFFRIN: One gold, one silver, two bronze medals – the US superstar made it onto the podium in all races completed in Cortina. Even if Shiffrin missed gold in the slalom at the end of the World Championship, her record of 11 medals in 13 World Championship races is unique. In the all-time list of the best, only the German Christl Cranz (15) won more individual medals than the American.

The  World Cup in her adopted country of Italy finally helped the Swiss woman to win her first World Cup title, which she appropriately picked up in the Super-G as a top favorite. After that, the 29-year-old was inspired and followed up with bronze in the downhill and surprisingly gold in the giant slalom. In general, Switzerland has confirmed its status as a skiing power, with nine medals there were most of all countries and for Swiss-Ski as many as there have not been in Vail since 1989 (11).


GERMANY: It was the best German World Ski Championships in eight years.

The  speed team celebrated three silver medals in the first week of the World Cup.

The  sensational second place of exile “Ösi” Romed Baumann in the Super-G was followed by Kira Weidle and Andreas Sander in the downhill. And also in the second week the DSV made it to an award ceremony, as it was bronze in the team competition behind winners Norway and Sweden.

ORGANISATION: Regardless of whether it’s the slopes, the Covid tests, the press support, the transport concept – the World Cup organizers have delivered a performance that has been praised from all sides. Even the weather, apart from the first three days, was almost unreally beautiful.

The  symbol for the Italian bankruptcy-bad luck-and-breakdown series is Federica Brignone, who flew three times. Downhill favorite Sofia Goggia was unable to take part due to a knee injury.

The  World Cup premiere with a significantly slower course and a delayed gold decision for the women because the FIS officials were not familiar with their own rules, turned into a failure. Of course, it was out of the question that FIS race director Markus Waldner was threatened with killing by email.

MARCO ODERMATT: Coming to the World Cup as a possible top star, the Swiss experienced one disappointment after another. In the downhill he just missed the medal in fourth place, in the Super-G and parallel competition he finished 11th. After his failure in the giant slalom as a favorite, the 23-year-old spoke of the “blackest day” of his career.


MOOD: In the finish stadium in the middle of the majestic Dolomites, the mood clearly went off, it could not arise due to the Corona restrictions.

The y only allowed VIP guests in the stands. Even without fans, Cortina was well attended (see below), but the Italians stayed in town during the races and indulged in the Dolce Vita in the open bars.

APPOINTMENT: At least one race every day in the second week of the World Cup, no relaxation for racers and OC staff. Liensberger, for example, competed in four competitions in five days and displayed admirable energy. Some others came to their limits as a result. Combination, parallel individual and team competition was an annoying accumulation of not very exciting disciplines for traditionalists.

The  FIS Congress will decide whether the program will continue with 13 races in Courchevel / Meribel in 2023.

BLIND FLIGHT IN THE BUBBLE CONCEPT: When hosts of second home owners rolled into Cortina at the weekend, the famous pedestrian zone was as full as Vienna’s Kärntnerstrasse in the pre-Christmas hustle and bustle. Athletes, OC employees and media workers, who were encouraged to stay in their own bubbles on the mountain, were able to mingle unhindered in the valley.

The  feared World Cup cluster still failed to materialize, although thanks to the permanent tests several corona cases – including those with the English virus variant – were fished out.

After an attack on the school cloud, the police investigated –...

The Classic transition and the options at a glance