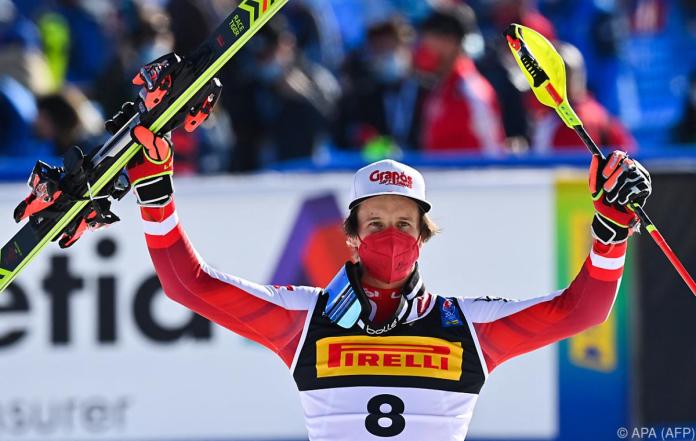 Adrian Pertl unexpectedly won silver in the slalom at the end of the 46th Alpine Skiing World Championships.

The  young World Cup debutant from Carinthia even led sensationally on Sunday halfway through the last World Cup competition in Cortina, but after third-best run time missed gold by 21 hundredths.

Pertl had previously only achieved a podium place in the World Cup, a year ago he was third in the slalom in Chamonix. He was preferred to Fabian Gstrein for the World Cup. A decision that worked, because after the first run, Pertl (24), who was driving with starting number eight, led sensationally and for the first time in his career in a slalom. While his teammates and co-favorite Marco Schwarz ultimately failed, the young Carinthian also kept his nerve in the decision despite a Norwegian double lead Foss-Solevaag ahead of Kristoffersen in the 63-goal course of his coach Marko Pfeifer.

After three intermediate best times, Pertl only lost the decisive tenths in the decision in the finish. “Second is like a gold medal for me”, cheered the freshly minted slalom runner-up from Ebene-Reichenau. “Unbelievable! That it would work that way, I didn’t expect it. I’m over the moon,” said the Carinthian, who was called “Adi” by his teammates.

He had already noticed that Foss-Solevaag had taken the lead. “

The n you have time to wait and start to think. About the course, what you can do wrong, what you can do right,” said Pertl. “It was a fight. But it was great that it went so well. I had to fight to be at the start, and now the silver medal, huge.”

World Cup dominator Schwarz was eighth after race one, Michael Matt 13th. Manuel Feller only made 24th after a material mistake. Because the 30 rule had been overridden and the top 15 had been overturned due to concern about a slope softening under the sun, Matt was able to start third in the decision, Black eight .

14 of the 15 possible runners for top positions made the decision within a second and thus had good chances. All attacked, but four were eliminated. So also combined world champion Black, who threaded after a strong interim. That happened to Feller in the second run, Matt finished ninth.

“It was arranged and I was on a very good path,” said Schwarz, regretting the failure in his strongest discipline after two medals in combination (gold) and giant slalom (bronze). “Of course it’s a shame and I’m brutally pissed off. It was a stupid mistake and on the Lett’n you’re just smeared away even more,” added Schwarz. To compatriot and training partner Pertl, he said: “I’m brutally happy for Adi, so it makes me forget all about it quickly. To go down so cool at the first World Cup, you can only take off your hat. He’s a cool dog . ”

Matt explained: “Even with me everything would have been done with the top 15 crashed. If you showed a good run up there, a lot would have been possible. I’m not able to make a very fast swing at the moment.”

Foss-Solevaag celebrated gold, because he is also a “double world champion”, as Norway had also won the mixed team competition. “World champion is a dream for me. It was a difficult second run, I knew I had to accelerate. It was a good run, I’m super satisfied,” beamed the Flachau winner, who had been in top form for weeks. “Two golds in Cortina is unbelievable. We had so many falls, injuries, this result is good for the team.” Kristoffersen said: “Gold is definitely worth more to Sebastian than my bronze. To be on the podium, you have to be satisfied,” said the Norwegian, who was riding in a mixed season due to material problems.

For Austria it was the strong end to a highly successful world championship and the first silver in Italy. With 8 medals, 5 of which were gold, 1 silver and 2 bronze, Cortina was one of the most successful alpine title fights ever.

The  ÖSV President was accordingly satisfied, as it was a strong last Alpine World Cup for the Tyrolean who was leaving in the summer. “We didn’t lose gold today, we won silver. Pertl is a cool guy and has cleaned up the medal table. That’s nice.” Digital radio in Finland – a role model for Germany?

Court overturns the ban on demonstrations in NRW

US Congressman dies of Covid-19 at the age of 41

Out in the FA Cup against Manchester United: Liverpool scores again,...

EU and UK agree on a deal