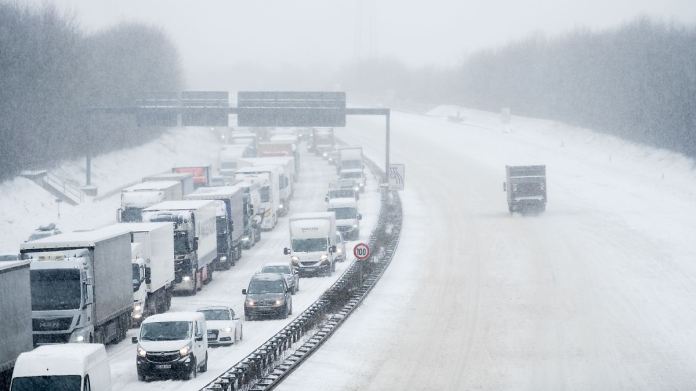 Snow chaos on the A2
Drivers spend night in traffic jams

Freezing temperatures and snow cause chaos on the A2. Dozens of trucks get stuck and cause a mega-traffic jam. Some road users have to spend the night in their vehicles in the freezing cold.
After the snow chaos on the A2 near Bielefeld, the traffic jam has not yet resolved in the early morning. Drivers in the middle of the traffic jam would have to be prepared to spend the night in their cars, said a police spokeswoman. As early as Monday afternoon, trucks got stuck on the highway because of the snow. In the meantime, a 37-kilometer backwater formed that stretched as far as Lower Saxony.  The  highway was completely closed.

On Tuesday night, the situation slowly eased because the traffic was diverted via an alternative route on the A33. “It will take a very long time before the ball has broken up,” said the spokeswoman.

The  ADAC recommended driving around the area extensively. All rest areas are busy. According to the police, the situation near Dortmund, where the A2 was also blocked, was a little less dramatic.

Dozens of trucks got stuck on the road in the direction of Oberhausen on Monday afternoon and had to be freed by the technical relief organization, the police said. All traffic is jammed between the Kamen / Bergkamen exit and the Dortmund motorway junction, and nobody can get through. In the meantime, the backwater was ten kilometers long, according to the situation center.

“We are currently trying to untangle the ball,” said a police spokesman in the evening.

The re were no accidents.

The  police warned the short message service Twitter against driving on the A2 in the direction of Oberhausen.

The  roadways are “mirror-smooth”.

The  technical relief organization and the fire brigade took care of the drivers in both traffic jams and distributed hot drinks.

Price war from January: How a discounter is now putting Aldi...

IS supporter from Saxony-Anhalt arrested at Frankfurt Airport

Despite the pandemic: Swiss companies are creating thousands of new jobs