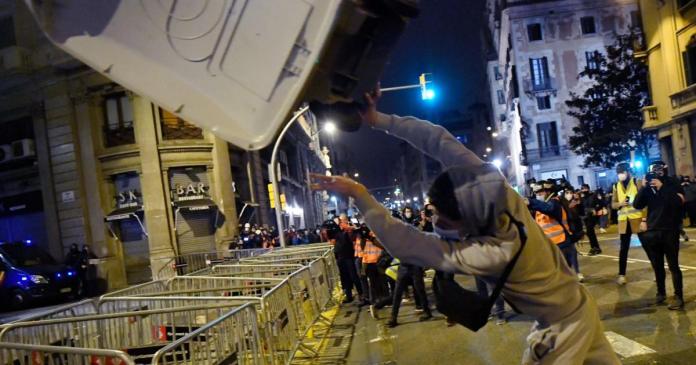 You thieves, you mafiosi! “

But other protesters do not care about this independence.  The y chant slogans like “thieves” or “Mafiosi”, exactly the words that the Spanish rapper Hasel used and that led to his arrest a week ago. So what had Hasél done? In 2016, the rapper called Old King Juan Carlos, who has since fled to Abu Dhabi, a “thief” and “Mafioso”. Juan Carlos, the former hero of the Spaniards, is involved in numerous corruption scandals and therefore had to leave the country.

In the song and on Twitter, Hasel not only let go of his anger against the king, but also of his violent fantasies. But in Spain there is a law passed by the former conservative government five years ago, which makes verbal glorification of violence, but also insulting state authorities – such as the king – a punishable offense. Artists, musicians, or political activists, they have all been punished or even put in prison under the title of this law. Officially it is called the “Law for the Protection of Citizens”, but on the street, especially among young people, it is called the “Gag Act”.

The  rapper was also sentenced to prison under this law. However, the Catalan refused to serve the sentence and barricaded himself for days in the university in his hometown of Lleida. When he was finally taken away by the police last Tuesday, he shouted with a raised fist: “We will never shut up!”

Three residents and one employee infected: Corona in the Eggeblick nursing...

RTL presenter in quarantine: Kuhn is “shocked” by corona infection

Goggia wins downhill – Flury and Nufer save the Swiss honor...