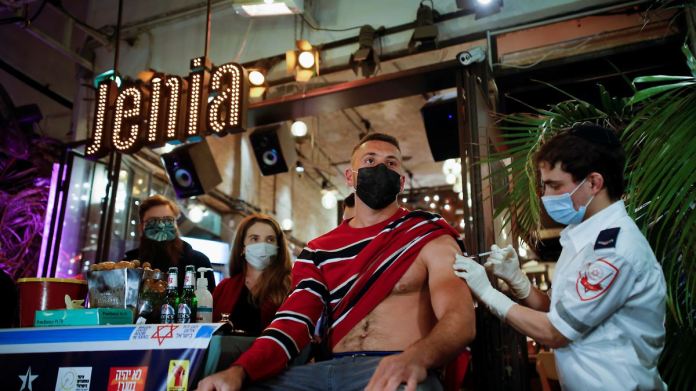 Special rules for vaccinated people
Does Germany use Israel as a model?

Out of the lockdown: In Israel, people are allowed to go back to swimming pools, hotels and cultural events – but only if they are vaccinated.  The  Green Pass is your ticket to freedom. Is such a vaccination card also conceivable for Germany?
Finally going back to the gym, splashing around in the swimming pool or visiting a museum: what remains a wishful thinking for Germans is already a reality for people in Israel – provided they are vaccinated. Because Israel introduced special relief on Sunday for citizens who have received a vaccination against the coronavirus or have recovered from illness. With a Green Pass they can visit hotels, theaters or sporting events again. “

The  Green Pass is gradually opening the country again,” said Prime Minister Benjamin Netanyahu on Saturday evening. A perspective that many Germans also want for their country.

Would such a vaccination certificate be a way of returning to normalcy more quickly in this country too?

The  delicate question of whether people should get special rights after their corona vaccination – or rather, get their basic rights back – has been discussed a lot in recent months. So far, the federal government and leading experts have spoken out against it. Only two weeks ago, the influential Ethics Council rejected a lifting of the freedom restrictions for vaccinated people for the time being.

The  argument: Even more clarity is needed about the extent to which corona vaccinations suppress the transmission of the virus, said chairwoman Alena Buyx.

Infectiousness after vaccination is decisive

So far it is not clear whether a corona vaccination only protects the vaccinated themselves or the people around them. This is not only crucial when it comes to easing the situation, but also for achieving herd immunity.

The  latest reports from Israel now give reason for hope:

The  Biontech / Pfizer vaccine is supposed to prevent almost 90 percent of the virus being transmitted to others, according to an unpublished publication by the two companies and the Israeli Ministry of Health. Scientists have yet to check whether the observational study with around 1.7 million Israelis will hold up.

The re is also initial evidence from Astrazeneca that the UK vaccine also reduces the likelihood of transmission. Oxford University researchers found a 67 percent reduction in positive smears in those vaccinated. But this study also has to be confirmed.

For the virologist and epidemiologist Klaus Stöhr, the preliminary, positive results are not surprising. Vaccinations reduced the full spectrum of the disease, including virus shedding, he said on the ntv podcast “Learned Again”. “In small cases, those who have been vaccinated continue to excrete the virus, but dramatically less than those who have not,” explained Stöhr.

The  risk of infection from vaccinated people will be reduced dramatically. This is even more true as soon as large parts of the population have been vaccinated and have antibodies.

Germany is currently still a long way from that. Discussions about a vaccination certificate based on the model of Israel therefore seem premature just looking at the vaccination numbers. Only about 2 percent of the roughly 80 million Germans are fully vaccinated. For comparison: In Israel, almost a third of its 9.3 million inhabitants have now completely immunized. This means that almost three million people there had their second vaccination more than a week ago. In addition, every citizen from the age of 16 can be vaccinated.

In Germany, however, there will probably only be a vaccination offer for everyone in the summer. In this country there is still a lack of sufficient vaccination doses. So, unlike in Israel, whether or not to be vaccinated is not an individual decision. According to the federal government’s vaccination plan, it is the turn of the risk groups first, followed by the rest of the population.

The  German Ethics Council also emphasized the aspect of injustice. Member Sigrid Graumann said against special rules for vaccinated people that they would be perceived as unjust as long as not everyone had the chance to get vaccinated. “It is questionable whether people who are not afraid of an illness and have not yet had a chance to be vaccinated would still be willing to adhere to the infection protection rules,” she said.

Other EU countries are advancing

It remains to be seen whether there will be a vaccination card à la Israel in Germany. A distinction between vaccinated, convalescent and all others falls within the competence of the state only in public spaces. After the lockdown has ended, private trade and private companies can decide for themselves who they want to include among their customers or guests.

“I can very well imagine hoteliers or restaurateurs saying that access is possible for people who have been vaccinated,” said Federal Justice Minister Christine Lambrecht on RTL / ntv Frühstart. “If we know that vaccination actually means that you are no longer infectious, that you cannot infect others or yourself, then there is no longer any reason to restrict fundamental rights.”

The  SPD politician added that people who could show a negative rapid test should also have access.

Other EU countries are already further in terms of special rules after vaccination. In Poland and Romania there are very specific advantages for vaccinated people. You are exempt from the ten-day quarantine obligation after entry. In addition, they do not count as contact persons for restrictions on private meetings. And Denmark also presented plans for a digital ID card with vaccination data at the beginning of February in order to make business trips easier in Corona times – and ultimately perhaps also to enable carefree participation in concerts or sporting events.

Corona strategy: The federal and state governments agreed on this relaxation from March 8th

Corona and domestic violence: when young people call the police themselves

Loosen before a possible wave ?: That is the situation before the federal-state meeting

Corona vaccination readiness in Germany: How many people want to be vaccinated?

Federal-state meeting: These are the new Corona resolutions

The way out of lockdown: The federal and state governments have decided

Biden and Pence get vaccinated – Putin is waiting

With video cameras against car flares on police premises – BZ...

Corona: The most important questions about the FFP2 mask requirement 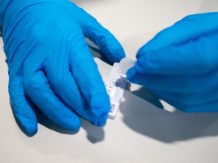 Social partners decided on a general collective agreement for testing –...