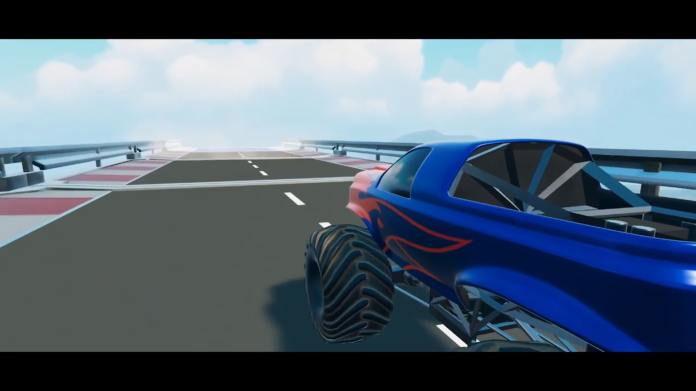 Those responsible at the German developer studio Pixel Maniacs announced the racing game “Can’t Drive This” for PS4 and PS5 today. It’s a co-op racer in which you share the screen with a friend. While one player is responsible for building the road, the other player controls a monster truck and follows the built route. He has to keep a certain speed, otherwise the vehicle will explode.

Two genres united in one game

“Can’t Drive this” is on the one hand an arcade racing game with unrealistic driving physics and on the other hand a Tetris-like game in which you have to place various parts of the street instead of blocks to pave the way for the driver.

The re are a total of four game modes to choose from. In “Yardage” there are three players in addition to a builder who fight for victory. In “Capture the Egg”, two teams fight for possession of a concrete egg that has to be transported to their own base. Another mode is called “Game of Drones”, in which there is a builder and up to three racers.

The  driver’s job is to pick up multiple brands to take to the next level. To make this project more difficult for you, the builder can use drones.

The re is also a single player mode called “Lone Racer”. Here you have to alternate between building the road as quickly as possible and then taking on the role of driver.

It is also possible to play online: Here you compete either with a friend or with a random person from the Internet, for example to move up in the rankings of the “yardage” mode. To customize your vehicle, there are tons of customization options to choose from. You can unlock them by performing various stunts.

The re are no limits to your creativity.

The re will of course be additional features on the PS5. In this case, the adaptive triggers of the DualSense controller are supported, which ensure a more immersive gaming experience.

In order to be able to offer a physical version in addition to a digital edition, the still young development studio has teamed up with Perp Games.

The  global publisher makes it possible to buy the game in retail outlets.

“Can’t Drive This” is already available on the PC via Steam and has mostly positive reviews. From March 19th you can throw yourself into the chaotic split-screen duels.

More news about Can’t Drive This.

This is what politicians and experts say: When will the vaccine...