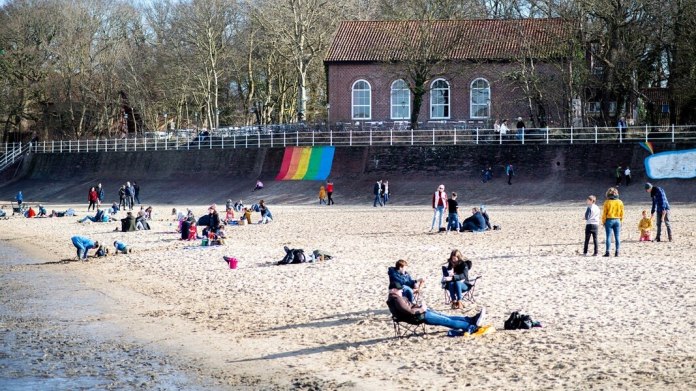 For example, there was a great rush at the Jade Bay. Several visitors lined the streets and the beach in Dangast. Some families took advantage of the sunny weather to build sandcastles. In Varel, the parking lots were sometimes overcrowded at noon.

The  temperatures rose here up to 17 degrees. It was even warmer in Wolfsburg with 19 degrees and in the Hanover and Helmstedt regions with 18 degrees.

Lots of hustle and bustle on Maschsee and Weser

At the Maschsee in Hanover, too, quite a few people were already without jackets while the lake was still under a slowly thawing ice sheet.

The  police reinforced their patrols to monitor the distance rules.

The  officials found that not all visitors adhered to the requirement to wear mouth and nose protection in certain areas on the bank. According to information, there were a three-digit number of speeches, but there were no major incidents.

The re was also a lot going on on the Weser. On the Alte Weser in Weyhe (Diepholz district), many day trippers unpacked the blankets for a picnic in the sun. In addition, the first kayakers and stand-up paddlers dared to go on the water.

According to the German Weather Service (DWD), it will remain mild and sunny up to and including Thursday – with highs of around 20 degrees in southern Lower Saxony. Towards the end of the week, temperatures should fall back to values ​​around 10 degrees during the day. At night there can sometimes be a slight frost.

Lots of sun in Mecklenburg-Western Pomerania

It is a little fresher on Monday in Mecklenburg-Western Pomerania. Here maximum temperatures of up to 15 degrees are expected, on the coast 10 to 13 degrees. After the fog fields have cleared in the morning, there is plenty of sunshine. At night, ground frost cannot be ruled out locally.

Sunny prospects for Hamburg and Schleswig-Holstein

Hamburgers and Schleswig-Holsteiners can also look forward to a sunny Sunday. It will be friendly with temperatures of 12 degrees on the Danish border and up to 17 degrees in Hamburg. On some parts of the coast it is still quite cool at 8 degrees. In the night of Monday, the DWD expects occasional fog fields and temperatures just above freezing point.

Ice drifts are normal in February, but not as warm as on the weekend, says the Kiel climate researcher. 5 min

On Tuesday, rail connections and schools failed in many places. During the week up to 11 degrees are expected. (02/16/2021) more

Such are the prospects for Lower Saxony, Hamburg, Schleswig-Holstein and Mecklenburg-Western Pomerania. more

TikTok hub for small and medium-sized companies – now launched in...

Most successful season to date in 34 years