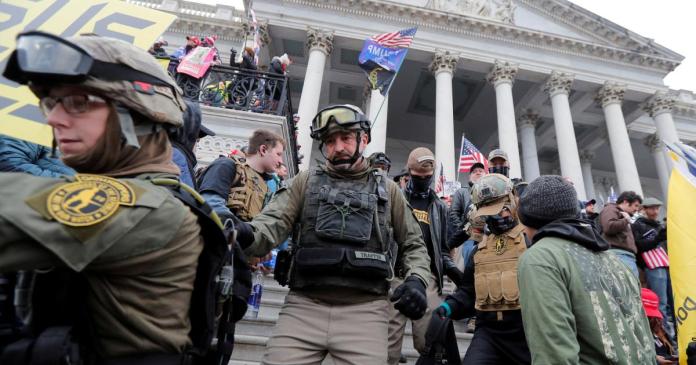 More than six weeks after supporters of ex-President Donald Trump stormed the US Capitol, the Justice Department has brought charges against six other suspects.  The  women and men all have ties to the right-wing militia “Oath Keepers” or are members of it.

The  allegations include conspiracy.

The  defendants are said to have agreed to hinder the certification of the results of the US presidential election, according to a statement from the prosecutor’s office on Friday.

The  six arrested this week in Florida, North Carolina and Ohio are said to have worked with three other suspects who were charged in January. Seven of the men and women are said to have worn paramilitary equipment on January 6 and marched up the stairs of the congress building in the style of a tactical military unit, broke through a door and stormed into the building.

One of the defendants, who describes himself as the leader of the “Oath Keepers” in Florida, wrote, according to investigators, in a message on Facebook in late December: “Trump said it was going to be wild !!!!!!! It was going to be wild !! !!!!! He wants us to go wild, that’s what he says. He called us all to the Capitol and wants us to go wild !!! Sir, yes, sir !!! ” Another suspect is said to have organized firearms and combat training for himself and others before January 6th.

Trump held a rally not far from the White House on the day the result of the presidential election, in which he lost, was confirmed. He incited his supporters that the election victory had been stolen from him. This was followed by a forcible storming of the Capitol, where Congress met to confirm Joe Biden’s election victory. Five people died.

The  Democrats accused Trump of “inciting a riot” and initiated impeachment proceedings against him, which, however, ended with an acquittal.

Are there really enough tests ?: Spahn: We’re going to the...

This is the plan for the mass tests in Vorarlberg –...

Schalke: The track to Christian Gross is getting hotter

“Tiger King” is beside himself: Joe Exotic’s husband wants a divorce