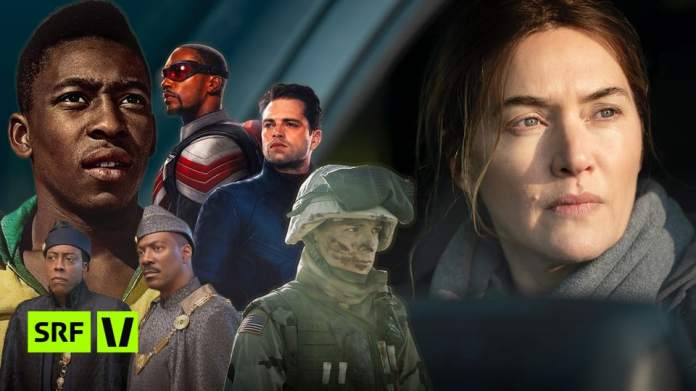 As always, with such crystal ball exercises there is the possibility that we are cruelly wrong with our tips.

So if you want to know whether our prophecies will ultimately come true, you can check it out with the series and film podcast “Skip or Watch”.  The re we will discuss the following titles in detail as they appear.

After Diego Armando Maradona, the other “best footballer of all time” will now also receive his cinematic monument.

Of course, with documentaries about living legends there is always the danger that they will freeze in front of the portrayed character because of too much awe, but Pelé’s backstory offers so many spicy episodes – after all, he once had to be smuggled out of the country disguised as a pilot after a visit to Nigeria (Long Story …) – that we also accept one or the other unnecessary worship of legends.

Copy & Paste everything that we said above about Pelé, but replace “Football” with “Hip-Hop” and “Pelé” with “

The  Prince from Zamunda”, is one of the great comedy classics of the 1980s, which you can still see every second Sunday afternoon on VOX or RTL 2.

Now Eddie Murphy has rounded up almost the entire crew from back then for a sequel. (Only the director is a new one.) Of course a cinema release would have been considered first, but yes … pandemic and so on …

With comedy sequels that arrive decades after the original, there is of course always the risk that they will end in disaster because our humor habits have changed in the meantime (“Zoolander 2”, “Dumb and Dumber To”, the list would leave it) continue at will), but after the surprising success of the “Borat” sequel (also available on Prime Video), we hope for the best here too.

It’s been over four and a half years (!) Since giant Disney last released an animated film that is not a sequel to another film.

The  heroine of “Raya and the Last Dragon”, the 59th animated film from Disney, is the girl Raya, who and her crew go in search of a lost dragon. (Okay, you would have figured that out on your own, right?)

Originally, the film should have come to our cinemas at the end of 2020, but now it is celebrating its worldwide premiere on the in-house streaming service Disney +. However, you have to turn the page again, as with the remake of «Mulan». “Ordinary” Disney + users will have to wait a few months to see the film at no additional cost.

“Spider-Man” Tom Holland can do it without a blue and red romper suit. He already proved that last year in the surprisingly good Netflix drama “

The  Devil All the Time”. Now he takes on the role of Cherry, an ex-soldier who, after an unpleasant mission in Iraq, becomes addicted to opioids back in his home country and begins to rob banks.

Behind the camera of “Cherry” are Anthony and Joe Russo, who already know Holland very well from comic book adaptations such as “Captain America: Civil War” or “Avengers: Endgame” (Never forget: the most successful film of all time!). And even if “Cherry” does the “junkie film” one-off a bit too often in the second half (spoiler alert?),

The  film is worth it just because of Holland’s “Tour de Force” performance.

The  Falcon and the Winter Soldier» (Disney+)

As long as the gates of our cinemas remain locked, the extremely successful film and series universe from comic book publisher Marvel will continue to run on the in-house streaming service.

For those who found “WandaVision”, the first Disney + entry in the “Marvel Cinematic Universe”, a bit too… weird (?), “

The  Falcon and the Winter Soldier” now offers a much more tolerable diet.

The  Falcon and the Winter Soldier” the two superheroes “Falcon” and “Winter Soldier” (Duh …) fisted the bad guys of this world away in the best “Bad Boys” buddy cop fashion.

If you miss the big bang-bang-bang on the big screen, you should be able to satisfy your appetite at least a little with this weekly, six-part mini-series.

If Joss Whedon, creator of series like “Buffy”, “Angel” or “Firefly”, as well as director of blockbuster films like the first two “Avengers” films, has a new work at the start, that would actually be a reason to Joy.

Unfortunately, Whedon is still in front the start of his new series “voluntarily” dropped out of this huge project – and the unsightly accusations, Link opens in a new window With regard to his way of working, which has since come to light, the anticipation is rather clouded.

The  Nevers” actually has the greatest potential to become the next “big” series on US broadcaster HBO (“Game of Thrones”, “

The  Sopranos”, etc.): A science fiction series about a group Women who used superpowers to fight evil in 19th century England? Count us in!

The  residents of the small town are a tight-knit community that is not particularly interested in investigations that are led by outsiders?!? Can it be?!?

Top-class thriller and mystery miniseries are among the great strengths of the US broadcaster HBO (“Big Little Lies”, “Sharp Objects”, “Chernobyl”), and we are accordingly very excited.

(* = April 11 and April 18 are the respective US start dates. Since Sky Show makes all HBO shows available fairly promptly, we assume that these series will be on these dates – or a short time later – can also be seen at our place. If something should change, we will update our list immediately.)

Admittedly, our streaming preview was also longer. What are you looking forward to? Tell us via Whatsapp: 079 909 13 33!

PS: For everyone who can be satisfied with “older” things, there is the following list:

Corona vaccine Moderna before approval in the EU

Robo Wunderkind wins award “Digital Innovations from and for Austria”

RKI urges lowering the number of cases – miscellaneous things from...

Pfizer vaccine: Difficulty getting additional doses of the vaccine

Corona: That’s what rapper Smudo thinks of the vaccinations – music