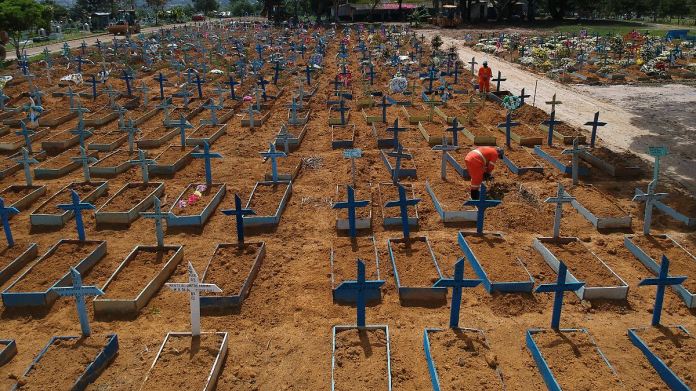 Almost 2.5 million corona deaths have already been reported worldwide. But in order to be able to estimate the real consequences of the pandemic, an international team of researchers has calculated the years of life lost worldwide – and comes up with a gigantic number.
According to an international research group, the corona pandemic has cost 20.6 million years of life worldwide so far.  The  study, which has now been summarized in a study, was led by Mikko Myrskylä, Director of the Max Planck Institute for Demographic Research (MPIDR) in Rostock, together with Héctor Pifarré i Arolas from the Universitat Pompeu Fabra in Spain.

Almost 2.5 million deaths have been reported worldwide since the coronavirus pandemic began just over a year ago. However, it is not enough to simply count the dead in order to correctly assess the consequences on mortality, according to a press release by the MPIDR. That’s why the team evaluated 1.2 million deaths from 81 countries to find out how old the people were who died of Covid-19 – and how much their lives were shortened compared to average life expectancy.

The  majority, around 45 percent of the years of life, are lost between the ages of 55 and 75, and 30 percent are lost to people under 55 years of age.

However, a comparison of individual countries reveals differences: in countries with high incomes, the oldest population group over 75 years of age usually carries more than half of the years of life lost, according to the study. Exactly the opposite is true in countries with medium and low wages, where the proportion of years lost is greater in the youngest population group under 55 years of age. In particularly affected countries, such as Italy and the USA, the population also lost up to nine times more years of life than during an average flu season.

A similar study by scientists from the Robert Koch Institute (RKI) had calculated the lost years of life especially for Germany: According to the study published in the “Ärzteblatt” a little over a week ago, at least 305,641 years of life have already been lost in this country.

In addition to the years lost due to death, which make up the majority, health restrictions in Covid-19 survivors were also taken into account. “On average, each deceased person lost 9.6 years of life,” the authors write. Men lost around eleven years, women around eight.

The  scientists analyzed around 1.7 million corona cases reported to the RKI from the past year and data on the severity and duration of the illness.

Julia Quinn: this woman is behind the Netflix hit “Bridgerton”

The world will be different after the corona pandemic