Jörg Siebenhandl has already played 285 games as a professional and has seen almost everything.  The  31-year-old is new to the fact that the referee sends him to the dressing room early.

In the 1: 2 defeat of SK Sturm at home against WAC, the Graz goalkeeper was excluded for the first time in his career. After a long ball, the Viennese rushed far out of his penalty area and put the charging Dejan Joveljic in the 35th minute. Referee Markus Hameter pulled out the red card for preventing a clear scoring chance.

Sturm coach Christian Ilzer is not entirely happy with the decision after the game on “Sky”, refers to David Nemeth, who was in the running duel with Joveljic: “You don’t necessarily have to give red, David Nemeth had the better line.”

The  coach did not doubt that it was basically a foul by his keeper. Ilzer doesn’t really understand that Siebenhandl even got out of his goal in this situation: “I think we don’t always make the right decisions now. He doesn’t necessarily have to get out, it wasn’t the best decision.”

Ilzer continued: “It was a fiercely competitive game.

The  WAC put the match on its rails with the free-kick goal and the exclusion. We had to pay tribute to being outnumbered and the long runs. Towards the end of the game we hit the gums. We have to Get momentum back on our side and get the best out of it. ”

Biden swears the USA to have a hard Corona time at...

Second fusion path demonstrated in the sun – neutrinos confirm the...

Corona: Jens Spahn promises vaccinations to all Germans by summer

Date and gameplay for the horror game 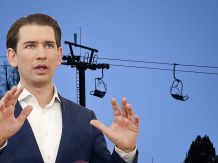