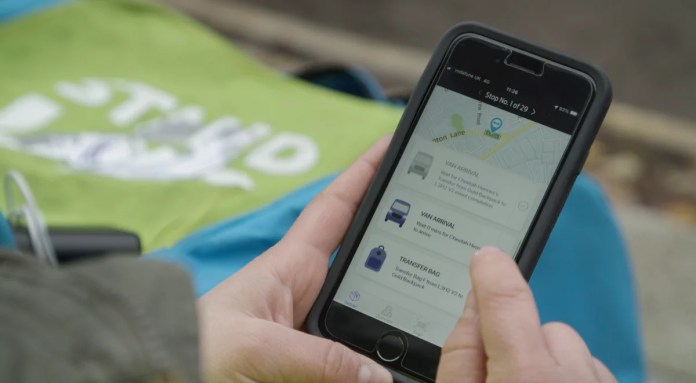 Ford and the parcel delivery company Hermes are testing the combined use of delivery vans and pedestrian couriers in a cooperation in London. This should enable parcels to be delivered to large cities faster and, by using fewer vehicles, more sustainably.

Hermes Innovation Lab launched the project back in September 2020 and tested it in a London district with heavy traffic in the run-up to Christmas – a period in which there are a particularly large number of deliveries due to online shopping. As Ford writes in a press release, two Ford Transit vans worked together with eight pedestrian couriers in three postal code areas. Together they are said to have delivered as many shipments as six vans without couriers.  The  delivery was also faster.

This was made possible through the use of the cloud-based, multimodal routing and logistics software MoDe: Link, which ensures coordination between the delivery vehicle and pedestrian couriers. It shows the drivers the optimal stopping point for the transport vehicle, where the pedestrian couriers can then take over the parcels for delivery. A smartphone app navigates the couriers along an optimal route to the transfer points and also shows the best route for delivery to the customer. This eliminates long distances, and parcel delivery is faster, more economical and more environmentally friendly. Thanks to the connection to the Hermes tracking systems, customers are informed when the parcel will be delivered, Ford continues.

In doing so, Hermes promises to make a contribution to reducing the volume of traffic in overcrowded inner cities and avoiding traffic jams. “We are looking at new initiatives to reduce emissions from last mile deliveries. This is also a response to the growing number of environmental zones in cities and new legislation in many municipalities,” says Carly Lyon, COO at Hermes UK. Accordingly, the system would be easily scalable and create additional jobs for couriers who “no longer have to drive or own a vehicle”.

However, Ford and Hermes left it open whether and when the system will be used in other cities – including Germany.

Playstation Plus: The games in January 2021!

New Corona variant: hard lockdown in London and other regions

Samsung warns: That is why replaceable batteries are not a concept...

Underestimated Green leader: Can Baerbock be Chancellor? The question has...

Nina Proll: “We are all only happy in moments!”

The number of deaths in the district of Giessen rises to...