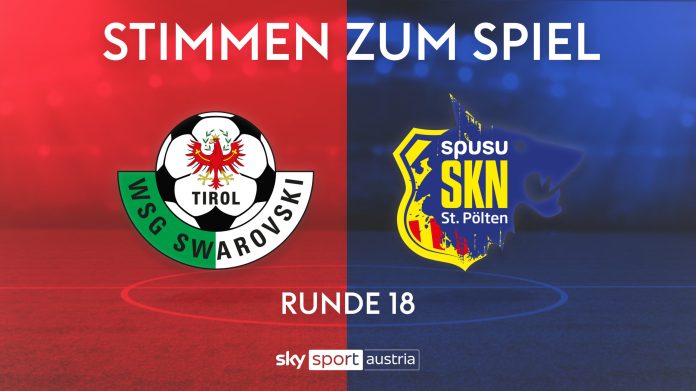 WSG Swarovski Tirol lost against spusu SKN St. Pölten with 0: 1. All votes for the game on Sky Sport Austria.

Thomas Silberberger (Trainer WSG Swarovski Tirol):
… after the game: “We missed two top chances in the first half. If we take the lead, then maybe we’ll leave the field as winners. St. Pölten was the expected tough opponent.

The n it is symptomatic of such a game that a standard situation decides the game. I mourn a little for the lead I missed, because those were two absolute top chances. Now we have made the situation unnecessarily sharp. (…) I already said at halftime that the team does not appear as a team, but that everyone experiences their ego trip a bit. If every player is ten percent on the ego trip, then you are one less and that’s how it felt. It bothered me a lot at halftime.

The n we couldn’t correct it. We have to take ourselves by the nose. I’m disappointed.”

… about the top 6: “We missed a great opportunity.”

… before the game over the top 6: “We now have St. Pölten, Hartberg and Admira within a week. We made 7 points out of these three games in autumn. If we do that again, we will be one and a half feet in the master group. ”

Thanos Petsos (WSG Swarovski Tyrol):
… after the game: “It was a regional league kick, definitely. Just long balls, duels and a standard that ultimately decides the game. (…) We tried to play out from behind, the opponent was low, suggested the balls and hoped that they would win the game via a counterattack or a standard. In the end they did too. ”

The  team has returned to the basics. After the goal it was all about fighting and we really went over it, about this point, which was also missing in many games. After 1-0 it was more fighting and cramping and somehow getting over it. You did it really well. ”

Kofi Schulz (SKN St. Pölten):
… after the game: “It’s important that we have the three points. Since we didn’t start the second half of the season so well, it’s all the more important that we now have a sense of achievement. We are happy to take that with us, no matter how. ”

Marc Janko (Sky Expert):
… about Kofi Schulz’s goal: “Fortunately, nobody stood in his way, otherwise he probably wouldn’t have been on the field.”

Walter Kogler (Sky Expert):
… after the game: “A victory that should give the team confidence again.”

Boateng back on the football field after Kasia’s death – football