Novak Djokovic has struck again – despite all the confusion on and off the court.  The  much-cited changing of the guard? Keep waiting.

Since mid-October, Daniil Medvedev (25) had won pretty much everything that is important and valuable in world tennis. He won the last major Masters tournament in Paris in 2020, he won the World Cup title in London, and in the new year he won the ATP Cup unbeaten with his Russian team. Six wins up to the final of the Australian Open followed, the headstrong Russian was considered by many to be the actual title favorite in the last duel for two – with cup defender Novak Djokovic.

But at the end of just 114 minutes of the final, Medvedev, the highly regarded challenger, stood in front of the ruins of all hopes – badly beaten by the man who has always been King of Melbourne.

More than nine titles in nine finals. And at best, continued dominance against any competition, against familiar rivals and new opposition, as in this tournament in the person of Medvedev or Alexander Zverev. “

The re is a lot of talk about the changing of the guard,” explained the eternal champion on this once again magical night: “But we are still at the top. We don’t just go away like that. “

Federer, Nadal, Djokovic: No way around

The  period of power of the Big Three – including Federer, who had been injured for a year – will also be extended at the beginning of this season. At the Grand Slams, the most important performance fairs, the honorable gentlemen can almost never be dealt with. Nadal, Federer and Djokovic collected 54 of the last 63 majors, and together they now have 58 titles: the Swiss maestro and the Spanish matador each won 20 trophies. And Djokovic, who once dissolved the duel for world tennis supremacy, is now closer than ever to their heels with 18 titles. Just as Nadal transformed the French Open into his very own tennis paradise, with no less than 13 titles in Paris, Melbourne is the Garden of Eden for Djokovic: He won here in 2008, 2011, 2012, 2013, 2015, 2016, 2019 , 2020 and now also in 2021. When he put a perfectly formed overhead ball unattainable for Medvedev at 9:40 pm local time on the final night, he had already done the second hat trick Down Under.

Djokovic wins against all odds

With a win, Medvedev could have moved to second place in the world rankings as the first player since July 2005, who is not called Djokovic, Federer, Nadal or Andy Murray. But first he has to wait for very elitist positions in the pecking order of the touring circus and for one of the four most coveted titles – like entire generations of professionals before him. For years, Federer and Nadal were the biggest spoilers, now Djokovic has come along with a matter of course and constancy that no one would once have believed the Belgrade player would have.

Above all, you have to give Djokovic one thing: if a lot of headwinds build up away from the Center Courts, he may be at the center of controversies and affairs – at his workplace he shows almost nothing of this problem mountain, of his involuntary role as a polarizing Capitano of men’s tennis. With the Melbourne triumph, which was safe on the home straight, he also put away the rainfall that had overtaken him in recent months – above all the disqualification at the US Open after hitting a ball against a line judge.

Djokovic: “ambition to want to stay ahead”

A year ago, at the last Grand Slam of the old normal, Djokovic had kept his flawless final balance in Melbourne in an hour-long nerve crime against Austria’s ace Dominic Thiem. But now there was practically no trembling and fear, no doubts and worries for the lithe, mercilessly efficient parade competitor. Quickly, with deliberate surprise tactics, Djokovic pulled away to 3-0 in the first minutes of the game, conceding the 3: 3 equalization, but in the decisive phase of the first set he managed the break to 7: 5. It was already a preliminary decision, because the series winner from Melbourne never let Medvedev back into the match. After the 2: 6 in the second set, Medvedev hacked his racket in frustration, he already suspected that the first Grand Slam success of the evening would be nothing.

Djokovic was also the man who set the pace and beat in the third set. As in the six matches leading up to the final, he shone with both powerful and precise serves. Djokovic had never served better than at this tournament, said his former coach Boris Becker later: “He also pulled Medvedev’s tooth.” And yet it was first and foremost this special state of mind that Djokovic as a member of the extraordinary top tennis trio also in this Finale excelled – the mentality of wanting to use these outstanding Grand Slam opportunities with all their strength and passion. Nothing to give away, in no second, in no rally. To show perseverance at the highest level, again and again. “It’s crazy to be able to win these titles over and over again,” said Djokovic, “it’s never a given. It’s hard work. And the ambition to want to stay ahead. “ 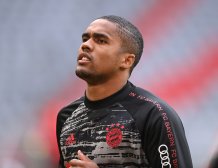 “We have to win” – Klopp worried about Champions League qualification Because of “The Crown”? Charles and Camilla discontinue Twitter

Family bed was the best decision in 2020 for Kusmagks

Employees in the Berlin prison hospital sound the alarm

The French bathe in ice cubes for over two hours

Bear hall in the house of the interior administration: video with...