At the end of the week, Bitcoin was worth more than $ 55,000 for the first time, cracking the $ 1 trillion mark in terms of total market capitalization. In the wake of the soaring that has lasted for weeks and months, the rates of many other digital currencies such as Ethereum, Binance Coin or Polkadot are also increasing. For this reason, the share of Bitcoin in the overall market for cryptocurrencies has recently decreased somewhat despite the massive price gains. According to a list by Coinmarketcap, this was recently only a little more than 60 percent, after being a little more than 70 percent some time ago. A unit of Ethereum, the second most important cryptocurrency, was worth more than $ 2,000 for the first time on Saturday.

Bitcoin has been on a high again since autumn last year. In October, for example, the rate was just $ 10,000 before rising to more than $ 20,000 in mid-December. At the beginning of January it crossed the $ 30,000 and $ 40,000 mark within a few days. After a consolidation phase until the beginning of February, things have been steadily improving again since then. Last week, Bitcoin was worth more than $ 50,000 for the first time.

Expert: Climbing seems to be getting out of hand

According to the crypto currency expert Timo Emden from Emden Research, there are currently many reasons for the bull market in digital currencies. “Not only Musk should play a decisive role,” he wrote in a market assessment on Saturday. Musk continues to enjoy helping fuel the rally. But this is also driven by investors’ fear of missing out on something. “Private investors in particular are likely to have jumped blindly into the market in the past few hours.”

Hesoun new Chairman of the Supervisory Board of Casinos Austria

Who is liable for corona vaccination damage? – Wiener Zeitung...

Xbox controller without a battery: Deal with battery manufacturer is to... 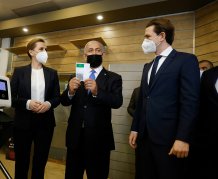 Connection technology specialist NORMA with recovery in the final quarter –...