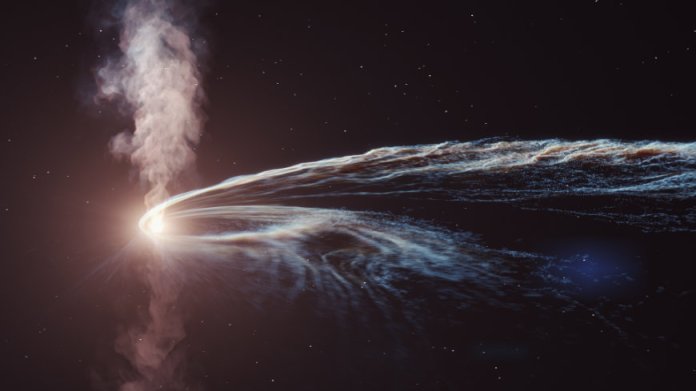 For the first time, it has been possible to detect a neutrino that was very likely accelerated by the destruction of a star near a supermassive black hole.

The  event could be detected with very different observatories and shows the potential of multi-messenger astronomy.

An international research team has put a ghostly elementary particle from a torn star on the trail of a gigantic cosmic particle accelerator: the so-called neutrino could be traced back to a supermassive black hole in a distant galaxy, to which the star came too close and was then destroyed by its colossal gravity was.

It is the first particle that could be linked to such a tidal disaster (in English “Tidal Disruption Event”).

The  work also shows the potential of so-called multi-messenger astronomy, i.e. the observation of the cosmos with the help of various messengers such as photons (light particles) and neutrinos.

The  neutrino began its journey around 700 million years ago, around the time when the first animals evolved on Earth. That’s how long the flight from the nameless galaxy with the catalog number 2MASX J20570298 + 1412165 in the constellation Dolphin took.

The  researchers estimate the mass of the gigantic black hole in the center of the galaxy to be that of around 30 million suns.

“Gravity gets stronger and stronger the closer you get to an object. This also means that the black hole pulled more strongly on the front of the star that is a little closer than on its back a little further away,” explains Robert Stein of the German Electron Synchrotron DESY. “

The  difference that has stretched the star is called the tidal force, and the closer the star gets to the black hole, the more extreme it is elongated. At some point it will tear the star apart, then we will have a tidal disaster. It is basically the same Process that causes ebb and flow of the tide on earth, but luckily for us the moon doesn’t pull the earth hard enough to tear it apart. ”

Around half of the stellar matter in the distant galaxy was hurled directly into space after the tidal disaster, the rest gathered on a swirling disk around the black hole. This so-called accretion disk resembles the vortex over the drain of a bathtub. Before the matter disappears into the black hole, never to be seen again, it becomes hot and hot and finally shines brightly.

The  observatory has this glow Zwicky Transient Facility
(ZTF) first discovered on Mount Palomar, California on April 9, 2019. Half a year later, on October 1, 2019, the underground neutrino telescope registered IceCube In the eternal ice of the South Pole, an extremely high-energy neutrino from the direction of the tidal disaster. “

The  particle rushed into the Antarctic ice with a remarkable energy of more than 100 tera-electron volts,” reports former DESY researcher Anna Franckowiak, who is now a professor at the University of Bochum. “For comparison: That is at least ten times the particle energy that the largest particle accelerator on earth can achieve Large Hadron Collider
at the European nuclear research center CERN near Geneva. ”

The  extremely lightweight neutrinos almost never interact and fly effortlessly through walls and even entire planets or stars without leaving a trace. Hence they are also known as ghost particles, and the detection of a single high-energy neutrino is a remarkable observation.

The  evaluation only shows a probability of one in 500 that this particular neutrino only came by chance from the direction of the tidal disaster.

The  observation called on more teams to investigate the event with a variety of instruments across the electromagnetic spectrum, from radio waves to X-rays. “It is the first neutrino from a tidal disaster and it gives us valuable clues,” explains Stein. “Tidal disasters have so far been poorly understood.

The  neutrino discovery indicates the existence of a central, powerful machine near the accretion disk that spits out fast particles. And the combined analysis of the data from the radio, optical and ultraviolet telescopes also shows that tidal disasters are gigantic particle accelerators can work. ”

The  observations can best be explained with a model, as the head of theoretical astroparticle physics at DESY, Walter Winter, and his colleague Cecilia Lunardini from Arizona State University in a separate study: Energy-rich streams of matter are formed that shoot up and down out of the system. “

The  cosmic accelerator spits out different types of particles, but apart from neutrinos and photons these are all electrically charged and are therefore deflected by intergalactic magnetic fields on their journey through space. Only electrically neutral neutrinos, like light (photons), can travel in a straight line from the source to the earth and can be traced.

The  combined observations demonstrate the strength of multi-messenger astronomy,” emphasizes team member Marek Kowalski, head of neutrino astronomy at DESY and professor at the Humboldt University in Berlin. “Without the evidence of the tidal disaster, the neutrino would be just one of many, and without the neutrino the observation of the tidal disaster would be just one of many. Only by combining the two could we burst open the cosmic particle accelerator and learn something about the processes inside it. ”

The  connection between the high-energy neutrino and the tidal catastrophe was discovered by a computer program called AMPEL, which was developed at DESY specifically for the comparison of ZTF and IceCube-Observations had been developed.

The  Zwicky Transient Facility is designed to observe hundreds of thousands of stars and galaxies in a single shot and to search the night sky particularly quickly. Thanks to its large field of view, the ZTF’s 1.3-meter Samuel Oschin telescope can completely observe the entire night sky in just three nights and thus detect significantly more objects that suddenly light up or fluctuate in brightness than all previous optical surveys.

“Since the investigations began in 2018, we have identified more than 30 tidal disasters and thus more than doubled the number of known such phenomena, says Sjoert van Velzen from the Leiden Observatory in the Netherlands.” When we discovered that the second brightest tidal disaster that we have also observed the source of one of
IceCube registered high-energy neutrinos, we were thrilled! ”

“We may only see the tip of the iceberg here, in the future we are expecting many more such connections between high-energy neutrinos and their sources,” emphasizes IceCube– Chief scientist Francis Halzen, professor at the University of Wisconsin-Madison who was not involved in the study. “A new generation of telescopes is currently being built that will offer greater sensitivity to tidal disasters and other suspected neutrino sources. Even more important is the planned expansion of the IceCube neutrino detector, which should increase the number of observed cosmic neutrinos at least tenfold.”

The  tidal disaster is only the second source that could be assigned to a cosmic neutrino. In 2018, a multi-messenger observation campaign identified the active galaxy with catalog number TXS 0506 + 056 as the source of a high-energy neutrino produced by
IceCube Was recorded in 2017.

The  team reports on their observations in two specialist articles published in the journal Nature Astronomy have appeared.

Attention: The weather service warns of snow and frost over several...

From Monday? From Wednesday? From Saturday? Today the...

“I gave everything today”

The first corona vaccines are so safe

Draghi before the last hurdle in the Italian Chamber of Deputies