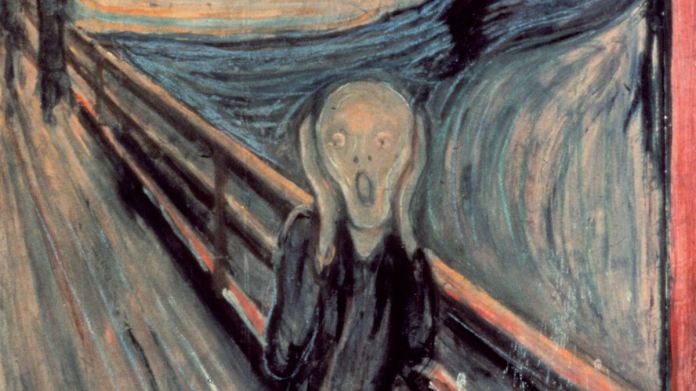 Guesswork is over
Secret of Munch’s “ The  Scream” revealed

A mysterious lettering on the painting “

The  Scream” has occupied the professional world for years. Now the riddle is solved. According to the Norwegian National Museum, the line comes from the master painter Edvard Munch himself.

The  reason for the scribbling is probably an offense the artist had experienced.

The  Scream” was written on the oil painting by Edvard Munch himself. With the help of infrared images, the Norwegian National Museum in Oslo found out that the sentence came from Munch himself. “

The re is no doubt that the inscription is Munch’s own,” explained curator Mai Britt Guleng.

The  sentence, barely noticeable to the naked eye, was written in pencil on the color of the painting after Munch had finished it.

The  painting caused criticism and speculation

How the note got there has been speculated for some time. One theory was that an indignant bystander had once written the sentence in the sky of the “Scream” original. Others speculated that the tiny lettering, first discovered in 1904, came from the painter himself.

The  Norwegian art experts can now confirm this theory.

On the one hand, thanks to the infrared images, they were able to compare the handwriting with notes and letters from Munch; on the other hand, they based their findings on an event in 1895, when Munch first showed the work in his home town of Oslo, which was then still called Kristiania. “

The  Scream” had sparked a lot of criticism and speculation about Munch’s state of mind at the time, which led, among other things, to a young medical student named Johan Scharffenberg referring to Munch’s works at an evening discussion as evidence that the artist was not quite sane.

This hurt Munch very much, as he wrote in letters and diary entries, according to the museum. Both his father and sister suffered from depression, and Munch himself was hospitalized in 1908 after a nervous breakdown.

The  inscription can be read as an ironic comment, but at the same time as an expression of the artist’s vulnerability,” curator Guleng was quoted in a museum announcement. “

The  fact that he wrote on the finished painting shows that creating has been a continuous process for Munch.”

Between Hanover and Berlin: man beats up his partner in the...

Three ATMs in Rhineland-Palatinate were blown up The dates for the coronavirus vaccinations in Karlsruhe and the southwest...

Friedrichsdorf: Danger from object on A 5 between Wetterau and Nordwestkreuz...