The  outdoor spectacle at Lake Tahoe is history.

The  National Hockey League can look back on a successful event despite the complications in the first game.

On the first day, the Colorado Avalanche and the Vegas Golden Knights faced each other. However, due to irreparable damage to the ice, the game had to be postponed until the evening hours.

The  avalanche secured a 3-2 win against the golden knights – for the Avs it was the first success in an outdoor game.

Because of the lessons learned from the first day, the game between the Boston Bruins and Philadelphia Flyers was postponed. At 01:30 CET, Michi Raffl and his Flyers started the new edition of the NHL Winter Classic 2011.

The  heavily replaced Flyers had to admit defeat 3: 7 in the end.

The  pictures that these two days delivered can definitely be described as successful advertising.

The  location at the 18th hole of the golf course in Stateline, Nevada, turned out to be a dreamlike location, the background, consisting of Lake Tahoe and the surrounding mountain landscape, conveyed a pure “outdoor hockey feeling”. It is safe to assume that the NHL will continue to hold such events in the future.

Weather: A massive temperature change hit Germany at the weekend –...

Coming-out by Marco Lehmann – “As a top gay athlete you...

Approach: QIAGEN and Quidel shares in green: Quidel appears to be... 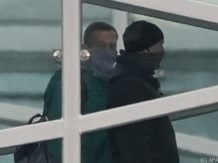 Navalnys whereabouts after arrest on return to Moscow unclear – politics...