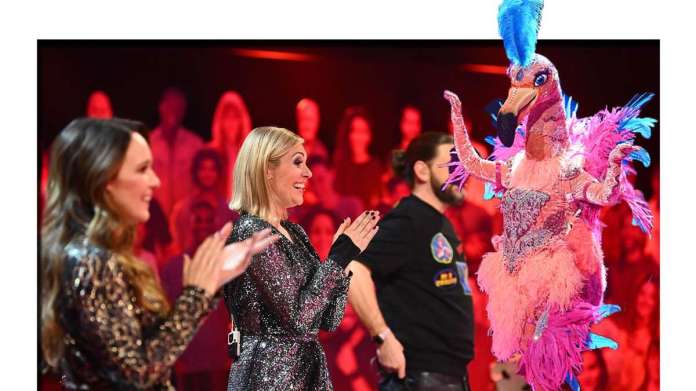 The  Masked Singer” goes into the fourth round. A swinging flamingo ensures maximum confusion for the guessing team and the audience.

Cologne – It was the sensation! In the first episode of the new season of “

The  Masked Singer” the pig was exposed. No one less than ZDF sports presenter Katrin Müller-Hohenstein (55) hid behind the character. (Here you can find all the costumes of the new season.) Nobody would have expected that. Now the happy guessing continues.

The  turtle and the leopard are clearly among the fans’ favorites so far, but it is another character that provides a lot of conversation.

The  Masked Singer: is the flamingo man, woman or diverse?

The  spectators are even more confused after the appearance of the colorful flamingo than before. Many had suspected drag queen Olivia Jones (51) under the costume, an obvious assumption when you consider that there is hardly a reality format that the trash icon has not yet graced. A masked participation in a huge, colorful, glittering feather fumble – just as you know the 2013 jungle princess.

The  one or the other evidence speaks for the Hamburg woman, so the bird of paradise should like to be the center of attention outside of the show.

The  costume is also one of the largest with its 2.50 m, so Olivia Jones with her 1.95 cm could fit underneath.

But when the colorful bird starts to sing, the confusion is even greater: is a woman or a man singing here?

The  flamingo lasciviously swings its hips to “Sway” by Rosemary Clooney and Perez Prado, so that the 20,000 Swarowski crystals and 400 glass beads attached to the costume only wobble.

+++ Subscribe to our Telegram channel now and be the first to read our best stories. +++

The  advice team consisting of Rea Garvey (47), Ruth Moschner (44) and guest Carolin Kebekus (40) is totally confused. “He or she-she or he”, it just can’t be said. That didn’t happen with “

The  Masked Singer” either. While the guessing team cannot decide between Bill Kaulitz, Jorge Gonzales, or Maren Kroymann, ESC winner Conchita Wurst is now in first place in the audience ranking.

Further evidence of who is actually hiding behind the character of the shimmering glitter bird is always available on ProSieben on Tuesdays at 8:15 p.m.

Uncomfortable week with sleet in Berlin and Brandenburg

Return to face-to-face teaching: “Whoever wants to open has to make...

Corona: How the virus gets into the brain and what damage...