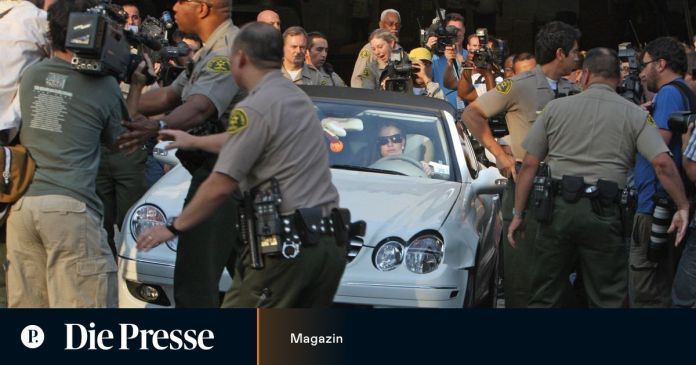 Main picture
•
Everyone wants a piece of the pie: Britney Spears’ life has been the subject of news for years.
•
AFP via Getty Images

Young women in public in particular are exposed to enormous pressure. However, the current debates about Britney Spears and the late German model Kasia L. show that the standards are crooked. Why are women bullied in public? And how does that translate to social media?

“We are sorry, Britney.” It was 20 years ago that the American pop singer was at the peak of her career. Her songs became instant hits, she performed in arenas, the Pepsi corporation paid her millions of dollars for pictures of her sipping a coke can.

The  whole world knew the young woman, who was born in 1981 in the state of Mississippi and practically sang from then on: in kindergarten, in the church choir, shortly afterwards on New York’s Broadway, then in front of the camera. With Christina Aguilera, Justin Timberlake, Ryan Gosling, she led the children’s series “Mickey Mouse Club” when she was a teenager. She was 16 when she recorded her first album.

And from then on, nobody could get enough of Britney Spears. Not enough about her music, her performances, the character she portrayed: young and sweet, innocent and sexy alike. Spears and everyone around her made good money from it. And everyone wanted a piece of the cake.

The  fans too, the TV stations and the gossip magazines as well.

Consciousness arises. So 20 years later. People say they would rather return the piece of cake: “We are sorry, Britney”, they write on the net. Among them are those who publicly made fun of Spears when she could no longer be seen in front of the lenses of the camera, which was always aimed at her, comedians, journalists. Among them is Justin Timberlake, her ex-boyfriend, who turned the split with Spears into a media spectacle. He spoke publicly about the couple’s sex life; in one of the lyrics he implied that Spears had betrayed him.

The  media picked up the story back then. “What did you do?” Asked journalist Diane Sawyer Spears in front of the camera. Spears was then 21 years old and in tears. Timberlake has now, in 2021, apologized for its actions. On Instagram.

What did it take for this “sorry”? A documentary by the “New York Times” which, when it aired a few days ago, showed how ruthlessly and how nefarious the public had pestered the young woman.

The  debate that then broke out in the USA shows, on the one hand, how much more attentive, alert people deal with sexualized and sexist reporting today – which is probably also due to the years of confrontation with the MeToo movement.

Past cases, such as that of Monica Lewinsky, are also reassessed in this light. Lewinsky, who had an affair with the then US President, Bill Clinton, in the 1990s – which ended in public, including impeachment proceedings – was publicly denounced as a “marriage destroyer”. Today Lewinsky himself says that she was “patient zero” of cyberbullying, the first to be in the online pillory. And many agree with her.

On the other hand, the debate shows how much you like to sweep things under the carpet for which you may be partly to blame. Women, their work, their bodies, their private lives, it’s all still mixed up and boiled up. For example, to sell magazines, and today above all to generate clicks.

Mud fight on the boulevard. Almost at the same time as the public atonement in the USA, something similar happened in Germany.

The  model Kasia L. allegedly committed suicide there in February. You don’t know the reasons.

“World of Warcraft” now takes you to the Shadowlands – Games

Registrations for mass tests in Vorarlberg are now possible

Criticism of ARD and ZDF because of Washington reporting

Frankfurt Airport does without a runway